Rio Is Ripe For Demotion 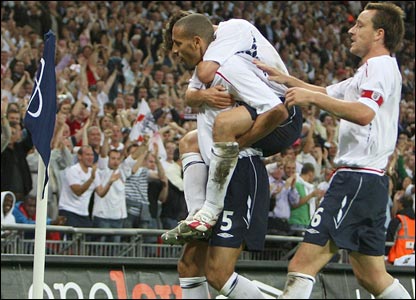 I never have and never will be the biggest fan of Rio Ferdinand. Whilst his injury time winner against the dippers allowed the majority of fans to kiss and make up, nothing can be done to entirely repair the damage done after he missed his drugs test. After demanding more money, after serving a lengthy ban during the crucial second half to what became a failed season, he showed us something that can never be undone. He is not a proper red. Whilst it is unrealistic to expect all our non-Mancunian players to love us in the same way the likes of Giggs and Neville do, it is not going to do any player any favours to show themselves for what they are. They will not become adopted in to Mancunia, and they will not become one of us. We have seen a number of foreign/non-Mancunian players over the years commit to and love us the way we want, and sadly, Rio Ferdinand will never be one of them.

Regardless, over the past season or so, I have come to love and admire another characteristic of Rio’s, and that is his desire to win. The hunger we see from him in every game he plays is certainly the quality I want to see in one of my players. To have someone who loathes losing so much is just what you need when you have you’re eye on winning a lot. When Van der Sar came charging away from his goal line at Fratton Park last season, and Rio watched his back pass role painfully over the line, he was mortified, he was seething, he was absolutely livid. He saw his team’s tight grip on the title start to losen, and he couldn’t stand it.

When Ferdinand first donned our captain’s armband, I was none too pleased. The captaincy should go to a player who loves the club, as a representative of both the team and the fans. Whilst Rio certainly has the presence to pull it off, I didn’t like that a player, who so soon after they’d shown they were not as committed to the team as we’d expect, was the captain. However, as I’ve softened, (and another goal against the dippers is put away) I see more than ever the real need to have Rio as our captain, currently. Despite Gary Neville’s continuous “two to three weeks away” claims, we cannot rely on this to be accurate. Whilst Giggs will always be loved at United, what he shows in love for the club and experience, does not compensate for his lack of leading abilities. Ferdinand is the man who, for the short term at least, should be leading our team out, instilling the same desire to win, and following that up with action.

Ferdinand had a great season for us last year, along with Vidic, and was an integral part in us winning our trophy back. He played more games for us than any other player, picking up just three yellow cards all season, two of those in the league, showing his ability to tackle clean on top of well. He was egged on more and more to come forward, and a number of occasions we saw him bursting in to the box (including the memorable occasion when he booted the ball in to that woman’s face after the moronic ref blew his whistle too late).

Oliver Holt, whose ABU bullshit has earnt him the prize of Sports Journalist of the Year a couple of times on the trot, wrote an interesting piece about Ferdinand a fortnight ago. Our defender is given constant bashing by England, and has faced the axe from the team for below par performances. When however, during the past World Cup for example, he bails out the entire defence (including John “can’t put a foot wrong” Terry) nothing seems to be said about it. England were shockingly poor in that World Cup, with Joe Cole, Owen Hargreaves and Rio Ferdinand being probably the only three who could return with their heads held high. Of course, Holt forgets about this, as he launches in to yet another damning piece about United.

“Steve McClaren might have a lot of players missing. But the man the country’s missing most is the man who shrunk back into the shell of the player who will take the pitch alongside John Terry at Wembley… The system chewed him up and spat him out as an Average Joe… Ferdinand has got to the stage where he’s ripe for demotion…He could have been the jewel in England’s crown. Instead, he’ll run out at Wembley one more bad performance away from being dropped. It’s sad to say it but it looks like Rio’s on the way out. Going without having fulfilled a magnificent talent. What a waste.”

As if you hadn’t guessed, I’m not England’s number one fan, and the dismal football they’ve been playing for years makes it easier to feel as nonchalant about them as I do. The 3-0 win over Israel, whilst not setting the World alight, showed some of the most creative football we’d seen from them in years (I know, which doesn’t say a lot), and I’m beginning to think maybe their matches are more worth watching these days (although I do struggle to show an interest when our lads aren’t representing the country). There’s always a groan in the local when someone like Lampard scores for England. “Why did it have to be him?” As the ball hit the back of the net for the third time last night in England’s Euro 2008 qualifying game against Russia (following a wicked Michael Owen goal), it was nice to be able to cheer in a very genuine way, for a change. Whilst somewhat clumsy in his skill, it was still a top class goal, tricking the defender, and rifling it with such power, making it difficult for any keeper.

Rio likes playing for his country, and scoring for England can only mean positive things for United. It can only mean the best for us. All going to plan, he should turn up at Goodison Park at the weekend with all the determination, fighting spirit, and confidence we could hope for.

If England don’t want him, fine, their loss. They can happily drag back Ledley King or Jonathan Woodgate for all I care. It won’t be the first or last time a red has been screwed about by England.

He’ll never be my favourite, but he certainly is growing on me, and I’d like to see him raise his game this season. He’s got what it takes to go down in our history books, and I hope years in to the future he is remembered fondly. Whilst he’s given a lot of stick, he can be the difference between us winning and losing, between giving up and fighting on, and that is the kind of player I am more than happy to see wearing United red, and for now, the captain’s armband.