Rio Used To Be A Ballet Dancer 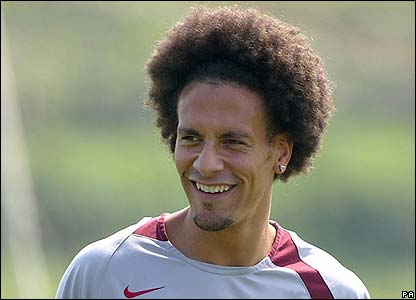 Ahead of Manchester United’s trip to Upton Park, Anton Ferdinand revealed that his brother, Rio, used to take ballet lessons. With Anton unable to replicate his brother’s ability, as yet, it appears as though he is eager to level the score somewhat. When Rio was Anton’s age, he made his big money move of £18 million, leaving his boyhood club West Ham for Leeds United. Anton doesn’t look ready to move to a bigger club yet, if he ever does, and doesn’t seem to match his brother for class and ability on the field.Clearly a bit miffed about his brother stealing the limelight and the plaudits, Anton decided to dish the dirt on Rio today, claiming that he undertook ballet lessons as a child. “I used to do gymnastics,” said Anton. “And Rio had ballet lessons. He was 13 and I used to copy him at home. It’s the sort of thing footballers slaughter each other for, but it has definitely helped him. Just look at his balance.”

Anton went on to describe how he felt when Rio left West Ham for Leeds, saying, “I’ve been compared to Rio all my life and when I was younger it used to get to me. I was 11 or 12 and it would upset me. In football, you have to be strong and do it on your own so maybe it was a blessing in disguise when he left West Ham for Leeds. I was devastated at the time. I can remember him coming in one day and telling me that he was going and it felt like the end of the world. But I’m not in his shadow any more. I do feel I’ve made a name for myself now. And I’ve done it on my own.”

Rio Ferdinand the ballerina? Whatever next…