Rio: Wes Is Keeping Nev Out Of The Team 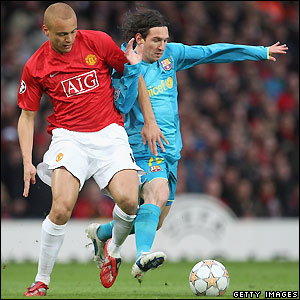 Wes Brown is the defender with the most appearances this season, which is somewhat ironic, considering he has been second choice for much of his United career. Whilst starting consistently during the 05-06 season, in the centre alongside Rio Ferdinand, Wes has struggled to keep a first team place down in his long career with United.

Wes has been starting for United since March 2007, when Gary Neville picked up an injury playing against Bolton. He’s played at right back for the majority of the season, but more recently has been playing in the centre to cover for an injured Nemanja Vidic.

United fans’ hearts sank when news broke that Vidic wouldn’t line up against Barcelona. We were playing against the attacking ability of Messi, Eto’o and Henry, we needed a result, and we felt like we needed our first choice defender playing to get it. However, Wes Brown stepped up to the plate, and put out one of the best performances I’ve seen from him in his time at the club. He was commanding, efficient and powerful, and dealt with the onslaught of attacking football Barca delivered.

Rio Ferdinand has today spoken out in praise of his team mate, who has recently signed a contract extension with the club, saying he is a player we can expect big performances from.

“Wes has been doing it all season and you expect big performances from him,” said Rio. “Gary Neville is fit now but he’s still managed to keep his place – and that speaks volumes for the way Wes has been playing. The manager has great confidence in him, he’s a fantastic professional and I always feel comfortable playing alongside him. Nemanja Vidic has been a top player for us over the last two years, and for him to be out of such important games might have been a problem. But it’s not when someone like Wes can step in so seamlessly. He’s been great.”

Based on his performances this season, would you be happy to see Wes Brown starting for United next season?