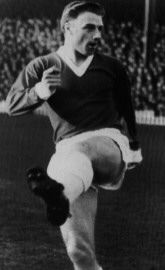 Albert Scanlon was 22 when the Munich Air Disaster occurred and he suffered terrible head injuries and a broken leg in the crash. Recovered and played well for several years on the wing, scoring 16 league goals the season after the crash.

Born in Hulme, Scanlon came through United’s youth system and made his début for Sir Matt’s first team when he was just 19-years-old.

He went on to play for United 127 times, scoring 35 goals, winning two league titles, before leaving the club in 1960.

Scanlon’s connection with United has remained strong though and when United won the title in 2007, he presented our players with the trophy, alongside Bill Foulkes.

Albert passed away at Salford Royal yesterday, aged 74, after spending the past two months in hospital suffering with kidney problems.

“It was with enormous sadness that I received the news of Albert’s passing,” former team mate and fellow survivor, Sir Bobby Charlton, said today. “He was a part of Manchester United folklore and was always a popular figure with the fans, especially because he was a Manchester lad. An exciting orthodox winger, he had pace, good ball control and could be relied upon to provide a constant supply of crosses to his fellow forwards. Albert’s place in Manchester United history is assured – he will never be forgotten.”