Robinho Is 'Not Stupid'... But He Wouldn't Come To United Over City 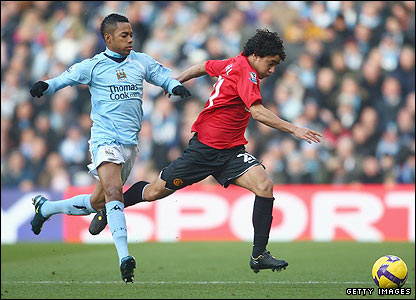 United played City off the park at Wastelands earlier this season and this time left with the right result. Even when United went down to ten men with over twenty minutes to play, City still couldn’t show up.

All the City fans you’d come across in the weeks leading up to that game bleated on and on about Robinho, about how he’d embarrass us. Robinho was in young Rafael’s pocket all match in a game that saw City with just one shot on target all game.

Today he has claimed that he has no plans to leave City and reckons the challenge at City in avoiding relegation beats winning medals with United. Good for him!

“I’m not stupid,” said Robinho. “Of course United is a more famous club in England. At City I can help to make a difference. What difference could I have made at a club like United when they can’t go any higher? The challenge appealed to me. It’s a good team, but it’s not a great team. If we were a great team then we would be at the top of the league and not in the middle. But I feel we are progressing.”

Robinho also reckons he won’t be leaving at the end of the season.

“It’s not in my mind to leave the club,” he added. “When I go on to the pitch I carry the club’s shirt in my heart. I want to repay everyone for making me so welcome. Fans have not seen the best of me yet.”

Get all news from RoM straight to your mobile for free