With the end of 2008 approaching, RoM will be reflecting on the year we’ve had as United fans. Here are the write-ups for January and February.

1st: Fulham away
Hargreaves scored his first goal for United with 15 minutes played, with Park making it 2-0 just before half time. To put the game beyond any doubt, Pompey scored a second half own goal.

Rooney and Ronaldo had been rested up until 20 minutes to go, with Fergie having one eye on our Champions League fixture.

2nd: Scholes will play in the final
“Hopefully we can get to the final again and this time Paul will get his opportunity,” said Ferguson. “I’m not a sentimentalist by any means. My one aim has always been to manage the club in the right way. But if we got to the Champions League final again then I’m telling you that I would have to be sentimental when it came to choosing my team for that one. I’d have to pick Paul to play because he deserves it.”

4th: Lyon at home
Ronaldo was the difference between the two teams, scoring on 41 minutes. United were now through to the quarter finals.

8th: Pompey at home in the Cup
With hindsight, we can now see this as the game that denied us another Treble. Cristiano Ronaldo was barged off the ball in the box a few minutes in, but amazingly, the referee waved play on.

We were left to rue this when substitute keeper Kuszczak gave away a penalty and received his marching orders. Rio Ferdinand went in goal for Muntari’s resulting penalty kick, but could only guess the right way, and United were dumped out of the Cup.

12th: Queiroz staying put
“I won’t ever say never, but there have been no discussions or talks,” said Queiroz. “Benfica was of interest to me in the past but I am at Manchester United and there are many more challenges in front of me.”

15th: Derby away
Following the battering Chelsea dished out to this relegation fodder in the previous match, we were expecting to boost our goal difference. However, it was United who could have ended up going a goal behind first, with Ben Foster needed to make a great save against Miller.

With less than 15 minutes played, Ronaldo finally broken the deadlock, and celebrated in dramatic fashion. Thank fuck for that, 1-0 United, top of the table!

19th: Bolton at home
Ronaldo scored twice with less than 20 minutes played, leading us to believe another Bolton drubbing was on the cards. It wasn’t to be though, with United keeping some in reserve for one of our biggest days of the season.

20th: Title too close to call
“It’s nip and tuck now,” said Ferguson. “I think it’s going to go to the wire. Chelsea will be key because they have got us and Arsenal at home. It’s a lead, it’s not a significant lead but it’s a lead nonetheless. With eight games to go the team who plays with the most consistency now will win it.” 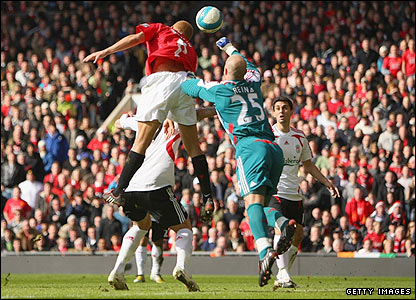 23rd: Liverpool at home
Beating Liverpool is one of the best feelings. Thrashing them is even better. It was Wes Brown, of all people, who got us our first goal. We went in at half time 1-0 up, whilst Liverpool went in 1 man down. Javier Mascherano lost his head and couldn’t keep his mouth shut, just days after all the fuss concerning Ashley Cole’s referee abuse against Spurs.

We had to wait until 10 minutes before time to get our second goal though, with Ronaldo heading past Reina, who against came flapping. Nani sealed the deal a couple of minutes later. 3-0, have that dippers.

Rooney loves it
“It’s always nice to beat Liverpool and it’s opened up a bit of a gap now at the top of the league,” said Rooney. “We know it’s in our hands now – we have to try and win as many games as possible and stay top of the league. We’ve got a good mix in the dressing room and we know what we have to do between now and the end of the season.”

27th: Anderson happy to be here
“I am very happy,” he said. “I moved to Manchester United to be in a team with such great players and they gave me such good support after I spent about eight months injured with Porto. It was a wonderful surprise, a wonderful beginning to come to Manchester United, get the support, start playing, playing well, and this reflects the way I feel now – very confident and very relaxed.”

29th: Villa at home
The goals were shared between Rooney, Ronaldo and Tevez, United winning 4-0. A surprisingly easy game for our lot.