Carrying on with the monthly reviews of 2008. 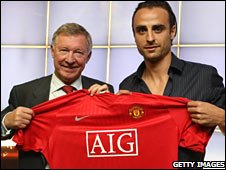 City put in a bid for Berbatov that was accepted, with news that Ferguson had picked up the Bulgarian from the airport without the permission of Spurs. What the fuck? In hindsight, it was immensely exciting, particularly with the Robinho to City/Chelsea storyline going on, after finding out that the bitters were now The Richest Team In The World (TM).

Hughes confirmed he was expecting to meet Berbabtov later that day. Fortunately, Berbatov never showed up.

I sat up until gone 12.30am watching Sky Sports News, waiting for the signing to be made official. Finally, it was confirmed. Berbabtov is a Manchester United player.

2nd: £135 mill bid for Ronaldo
“Ronaldo has said he wants to play for the biggest club in the world, so we will see in January if he is serious,” said City’s new owner, Al-Fahim. “Real Madrid were estimating his value at $160million (£90m) but for a player like that, to actually get him, will cost a lot more; I would think $240million (£135m). But why not? We are going to be the biggest club in the world, bigger than both Real Madrid and Manchester United.” My sides hurt.

3rd: Phelan replaces Queiroz
“Mick knows Manchester United inside out, having been associated with the club for the best part of 20 years,” said Ferguson. “He is a very talented and professional coach, whose ability and contribution to the club’s success has often been understated.”

12th: Berbatov happy to be here
“Now that I’m here I’m really pleased because my ambitions and goals are big and I want to fulfil them at the biggest club in the world,” said Berbatov. “When I heard about City’s offer and the money they wanted to spend I was surprised, but as I’ve said many times before, it didn’t make any difference to me I always wanted to come here. That was my only goal and I’ve achieved that.”

After a blistering opening, passes that split the Liverpool defence in half, Dimitar Berbatov, on his Manchester United debut, assisted a Carlos Tevez goal with just three minutes played. It was a perfect start and we looked set to continue on our record at Anfield.

Then Van der Sar had a rush of blood with half an hour played, leaping out to try and claim a ball he needn’t have bothered with, only to push it in to Wes Brown, deflecting it in to the goal.

Liverpool started to dominate the game and United sat back and let them. Giggs lost the ball on the back line with just over ten minutes to go, giving Ryan Babel the chance to shoot. Replays show he miss hit the ball massively, yet the bounce in the ground lead the ball to the back of the net. Gutted.

17th: Villarreal home
Our first game in Europe since being crowned Champions and we draw 0-0 at home to Villarreal. What the fuck is up with us this season? Ronaldo made his comeback and received a warm welcome. He almost provided a winning goal, but Jonny Evans’ header came back off the woodwork.

18th: Park glad to be back
“It’s been a long time since I last played for United, so it was good to get out there again,” said Park. “I’m quite satisfied with my performance, but there’s still room for improvement.”

21st: Chelsea away
We needed a result today. Our season had been disappointing so far to say the least and we needed to show up against Chelsea. We’d pipped them to the league title and the European Cup last season. We needed to prove we were worthy.

Park took the lead on the 18 minutes, with United having the better first half, before Kalou evened the score with 10 minutes to go. It was a fair result. United just couldn’t seem to keep it together for 90 minutes.

23rd: Middlesbrough in the League Cup
Our job of knocking Boro out of the cup became a lot easier after their captain got himself sent off. At the time though, it didn’t seem worth it, with talented youngster Rodrigo Possebon facing what appeared to be a career-altering challenge. Pogatetz planted his studs just below Possebon’s knee, then had the balls to have an indignant response when the referee showed him the red card. Cunt.

It was 1-1 at that point, Ronaldo taking the lead before, following suit for the season, Boro equalised. Giggs and Nani went on to score to wrap up the points.

26th: Giggs has new role
“At 34, tramping up and down the touchline is beyond Ryan now,” said Ferguson. “You have to respect the job he has done for us going up and down that touchline over so many years. No-one in the Premier League comes anywhere near him in terms of his adaptability. But I look upon him as a central player, either in midfield or up front.”

27th: Bolton home
The game that will be remembered for the penalty that never was. Jlloyd Samuel made a good, strong tackle on Ronaldo with an hour played. Ronaldo did not appeal but for whatever reason, Rob Styles deemed it to be worthy of a penalty. From inside the ground, it was more than obvious that a penalty was the wrong decision.

The press described this penalty as ‘decisive’, despite the fact Rooney scored 5 minutes after coming on as a sub. We also had 75% possession, 13 shots on target to Bolton’s 2, as well as 10 shots off target to Bolton’s 4. We picked up three points, we deserved every single one of them, but unsurprisingly, the press disagreed.

30th: Aalborg away
Fergie took this game seriously, fielding a proper team for what was anticipated to be an easy away day in Europe. Berbatov scored his first goal and second goal for United, after Rooney opened the scoring after 22 minutes. This is more like it!