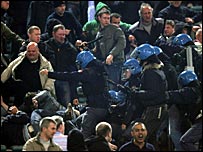 Disturbing scenes were viewed last night as Manchester United played Roma in Italy. It has been reported that 18 Manchester United fans had to go to hospital following stab wounds and head injuries, caused by the police as well as opposing fans.

When Roma scored the first goal, their fans ran towards the United crowd, taunting them, throwing bottles and coins. There were no police in the Italian crowd section, so instead of dealing with the instigators, they turned on the United fans, beating them repeatedly.

In shocking eye-witness statements, it has been revealed that women, children and disabled people were all victims of the over zealous Italian police.

“The police were beyond control,” said one eye-witness. “We were told there was going to be trouble outside the ground so we were told to be careful – as we were. We didn’t expect to be battered by the Italian police for doing nothing,” said another.

Businessman Stephen Fitzsimons, 53, from Stretford, Greater Manchester, was knifed in the groin as he made his way to the ground with three friends. He had two emergency surgeries and doctors told him he was lucky to be alive.

Some witnesses inside the ground spoke of terrified women and children running away from the police during one baton charge, while a disabled man was reportedly knocked out of his wheelchair.

Debbie Robertson from Rusholme said, “there was four or five police and they were coming towards me and my husband with the helmets and their batons. We were sort of pinned against a perspex panel, so he (the officer) started to shield us and say, ‘You’d better move somewhere else’ but there wasn’t really anywhere else to move to.”

Is this serious? Women, children and disabled people all being targetted by their police? Watch this space, I have a feeling shit will kick off big time next week.