Ron: Rooney Loves United... But I Want Him At Madrid 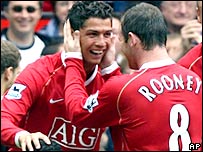 During the summer of 2006 the press predicted the downfall of Manchester United after our two best players had seemingly fallen out during the World Cup.

Apparently there was no way they could both continue at the club and we were doomed.

When on the opening day of the season we beat Fulham 5-1 with Rooney and Ronaldo both scoring and helping each other score, there were lots of disappointed people!

Cristiano Ronaldo has today said he would like to be reunited with Rooney and reckons our striker is just the right kind of player for Real Madrid.

“Wayne would be a sensation out here,” said Ronaldo. “I think we could do with Rooney to help us out. He would be brilliant if he came. This is the ideal place for the world’s best players and there’s little doubt he is one of them. Wayne has all the skill and determination you need to make a fine career here. He has shown just how good he is over the last few years in England. And there’s no doubt he would be the same sort of player in Spain. It would be lovely to see him here one day at Real Madrid. I realise it would take a lot for him to move from England. He loves the country, he loves Manchester United and he is a Liverpool boy. And United is a good club for him. But you never know what could happen in the future.”