Ronaldinho Rumours Resurface: Do we want him? 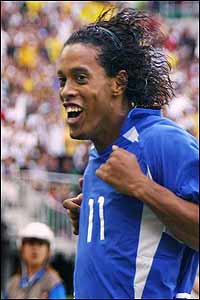 Back in 2003, when United looked set to sign Ronaldinho, we were met with disappointment when the twenty three year old signed for Barca at the last minute. Despite our attempts to lure him to Manchester, offering out of favour keeper Barthez as part of the deal to PSG, he opted to put pen to paper on a five year deal in Spain instead. As United fans, we are now used to the so-called “transfer sagas” following the recent issues with John Obi Mikel, Owen Hargreaves and Carlos Tevez, but back then, we were just amateurs. Kenyon offloaded Beckham, failed in landing Ronaldinho, so then he turned his attention to Damien Duff. But Duff went to Chelsea, and Kenyon followed, leaving us in summer 2003 having to make do with Djemba-Djemba, Kleberson, Bellion…oh, and Ronaldo.

In the June of 2003, Ronaldinho talked of his “burning desire” to join United, saying “I admire Manchester United and I love watching them play. Of course I would like to be at a great club like that — anybody would. The idea of joining Manchester United makes me dream, because they are a big, successful club and play my kind of football. I have a burning desire to be involved with a club that plays in big games all the time.”

Ronaldinho’s brother, Roberto Assis, who acts as his agent, said, “Ronaldinho wants to go to Manchester United, so at the moment it’s just a question of waiting for the deal to be completed.”

Whilst we had Ronaldinho onside, we pissed off the French club, and they were pretty relieved when Barcelona came in to match our £21 million bid. We were too cocky, setting deadlines and presuming the player was ours, despite refusing to confirm the offer we’d made verbally. Sir Alex Ferguson was sent over to sweeten the deal, but it was too little too late.

The summer of 2003 was the beginning of the end for United, the start of our “decline” as the press called it. Despite picking up a couple of domestic trophies, we couldn’t win the league, and were failing miserably in Europe. Ronaldinho, in contrast, picked up two FIFA World Player of the Year awards (2004/2005), the European Player of the Year award (2005), two La Liga titles (2005/2006) and a European Cup (2006). United fans sat back and cringed, looking at all the player we could have signed was achieving.

Upon failing to land Ronaldinho or Duff, we settled for a relatively unknown Portugese lad, as I’ve already mentioned. Although he wasn’t the instant success for United that Ronaldinho was for Barcelona, there is no question which player is currently on top when looking at the best players in the World. Reaching his peak in 2004/2005, aged twenty four/twenty five, Ronaldinho spent last season experiencing rifts with the manager and criticism from the Spanish press for putting on weight and not focussing on football. Barcelona lost out on the title on the last game of the season, with former reds van Nistelrooy and Beckham lifting the La Liga title with Real Madrid. Ronaldinho managed to turn his season around, to some extent, finishing the third highest scoring La Liga, but the season ended with no trophies for the Brazilian.

However, hindsight is a wonderful thing, and whilst having Ronaldinho to plug the gap of us going without the title between 2004 and 2006 would have been well needed, there is no doubt in my mind that signing Ronaldo, for some £8 million less, was the better deal. But now, rumours of us signing the Brazilian have emerged again. Upon returning late from international duty, Ronaldinho was left out of the squad which lost to Villarreal at the weekend. His contract is due to expire at the end of this season and the Spanish outfit have been keen to reiterate Ronaldinho is going nowhere, too keen really. There have been a couple of statements a week coming from the Barcelona president/Rikjaard/Ronaldinho/Roberto Assis for over a month now, all insisting there is no problem between Ronaldinho and the club, and that he is staying put. Milan and Chelsea were the two clubs tipped to have an interest, which has intensified following the repeated criticism of the playmaker, and his admission that he is bothered by it.

Reports this week though suggest that United are now sniffing around and are keen to sign the player we failed to get five years ago. Apparently Gill met with Ronaldinho’s brother, who pissed off Ferguson last time around with his greed, to assess what our chances of signing Ronaldinho were.

Now, if this is true (which admittedly, it probably isn’t) would we want him?

1. Ferguson has spent twenty years trying to boot out the ego from United players, so signing a player with one of the largest egos in football would only throw a spanner in the works.
2. Ronaldo, Nani, Anderson, Tevez and Rooney are all twenty three and younger, and possess the qualities (and more) that we see from Ronaldinho. Would I swap Rooney or Ronaldo for Ronaldinho? Certainly not. So why spend a fortune in January for a player who would offer us less than players we already have?
3. How good would Ronaldinho be in the Premiership? There is no doubting the guy has a phenomenal talent, but would he be able to showcase that as successfully is a rougher, faster league?
4. Is Ronaldinho on his way down? Have we seen the best of him, and by signing him, we are setting ourselves up for the second biggest flop (after Shevchenko) in Premiership history?

So, what do you think? Do you think it would be worth it for United to try and sign Ronaldinho again?
Whilst mulling that over, check this…