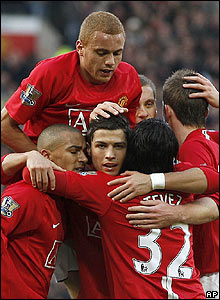 Today, for the fifth time this season, Ronaldo scored two goals in a United victory. Sixteen goals in nineteen games for the man unfairly deprived of the best player in the World title last week. He is on fire and, incredibly, is looking even better than he did last season.

Carlos Queiroz, Cristiano Ronaldo’s number one fan, has today said that the young Portuguese winger is a genius, and better than several players who were considered ‘the best in the World’ in their day.

“During my career I have worked with players like (Zinedine) Zidane, Ronaldo of Brazil, Raul, Luis Figo and Roberto Carlos. Yet I can honestly say I have never seen such a football creation like Cristiano Ronaldo,” he said. “Cristiano has so much natural skill and ability, but the great thing abut him is that he has a creative mind that forces him to always try new things.” Whilst trying these new things, many fans in England lost their patience with him. He was slammed for having ‘no end product’ when trying out his new tricks and moves. The patience of Manchester United has paid off, with Ronaldo well practised with his skills. “Fantasy has never been a problem for him,” Queiroz continued. “It has just been about using it on the pitch in the right way to get results for the team. He creates things in his own mind and then has the bravery to make it happen on the pitch. He brings something to every game. Cristiano will not only become the biggest sporting attraction in England, but also Europe and the rest of the world.”