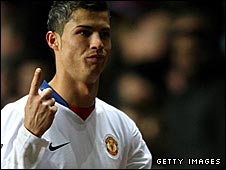 Cristiano Ronaldo was in training this morning, suggesting that he will be travelling to Spain for tomorrow’s Champions League game against Villarreal.

He limped off before the end of United’s 0-0 draw with Aston Villa draw, going straight down the tunnel for treatment.

“His leg is in a mess,” said Ferguson. “He is doubtful for Tuesday.”

He has been seen at Carrington this morning though and reports suggest he will play a part tomorrow. Gary Neville, Dimitar Berbatov and Danny Welbeck were all absent though, so will not be making the trip.

Do you want him to start?