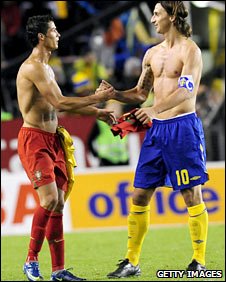 Manchester United were drawn to face Jose Mourinho’s Inter Milan in the next round of the Champions League. As defending Champions, the pressure is on, particularly when considering no team has successfully defended their Champions League title.

Mourinho, who like those before and after him, couldn’t keep up with Sir Alex Ferguson, and in his last season, dropped out of the title race some time before the official end of the season.

Ronaldo fancies our chances against Mourinho’s new team though and is desperate to reach the final again.

“Inter are a strong team, with great players,” said Ronaldo. “But we are better than them and I strongly believe we will succeed in beating them. By knocking them out we can feel one step from the final.”

Jose Mourinho recently farcically claimed that Zlatan Ibrahimovic was a better player than Ronaldo, which our winger doesn’t appear to be too arsed about.

“I respect everyone’s opinion,” he added. “But the trophies that matter are at my house, not Ibrahimovic’s.”