VIDEO: Rooney Is England's Saviour Again... Whilst Evans Gets His First For NI 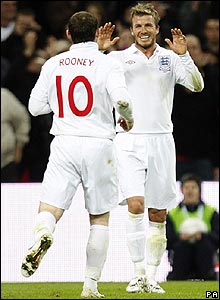 Following a week of slatings in the press and the England manager Fabio Capello calling him a ‘crazy man’, Wayne Rooney went on to score two goals in England’s 4-0 victory over Slovakia.

Rooney was named Man of the Match before even scoring his second, which turned out to be the last kick of the game.

Allowed to roam free, Rooney was a constant threat to the opposition, playing through superb balls which highlighted perfectly his great vision.

It was a defence splitting pass from Rooney to Stevie Me which saw Emile Heskey score the opener, before our Wayne scored the second and fourth goals for his country.

The same fans who will chant “You fat bastard!” when they come to Old Trafford were chanting his name throughout the game, with Rooney showing them just how much they’ll need him when the next World Cup swings around. 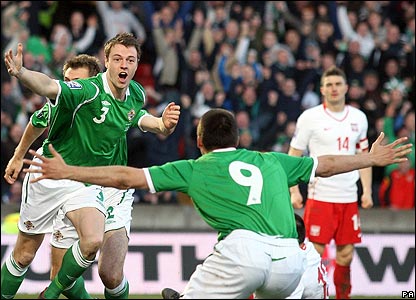 In other news, Ben Foster made his second appearance for England, Michael Carrick came on as a sub and played the ball in to Frank Lampard for his goal, whilst Rio didn’t play due to an injury picked up in training.