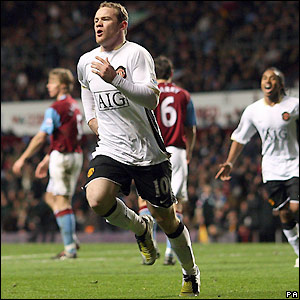 Sir Alex Ferguson criticised United’s home support following the 1-0 win over Birmingham but could be left with nothing to complain about yesterday. The fans sung from start to finish, belting out a whole collection of songs.

With the game looking as though it was going to result in a replay, the red following were desperate to see the introduction of Rooney, singing the White Pele song on a loop. Fergie kept us waiting though and it wasn’t until there was just twenty minutes before time that Rooney was brought on, after warming up for a good ten minutes or more.

Wayne Rooney made an instant impact, with his presence alone seemingly enough to inspire a previously unmotivated United team. He was instrumental in the first goal, scored the second, and with a perfect ball from the half way line, provided Carrick with a great goalscoring opportunity. It was remnant of the FA Cup Fourth Round game against Portsmouth last season where he was introduced with an hour played at 0-0, and went on to score both goals in an eventual 2-1 win.

After our victory yesterday, Rooney was quick to heap praise on the fans, declaring our support as brilliant. “It (the support) is brilliant. Some teams struggle to fill the away end in a Premier League match. Obviously we get more tickets in the Cup but we’ve filled it again. It’s a fantastic effort from the fans. The atmosphere’s always good.”