Rooney: United, Chelsea and Arsenal All Above Liverpool 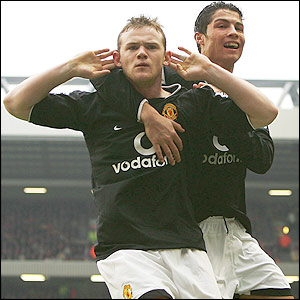 Liverpool beat United at Anfield a couple of weeks ago for the first time since 2001. We’re not big on records, we’ll never go a season unbeaten and we won’t go years without losing at Old Trafford, but the fact that Liverpool couldn’t even beat us on their home turf was something I enjoyed.

So, that’s gone now, but it doesn’t make Liverpool any more worthy title contenders. City, West Ham and Bolton got a result against United last season, but they didn’t leave others quaking in their boots, even though they beat the team that went on to win the league and European Cup.

The league was won last season with the lowest points total since 2003, yet Liverpool still finishing in 4th, some 11 points behind United, 9 points behind 2nd placed Chelsea, and 7 points behind 3rd placed Arsenal. Rooney, ahead of the Merseyside derby, has said he doesn’t expect Liverpool to finish any higher this season.

“It will be hard for Liverpool to challenge the top three,” Rooney said. “Third will be an improvement for them. But I still think it will be ourselves, Chelsea and Arsenal.”