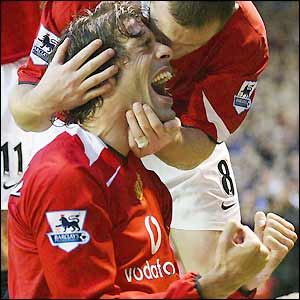 Sir Alex Ferguson claimed he was less hopeful of securing a striker before the transfer window closes, however Dimitar Berbatov’s omission from Tottenham Hotspur’s squad today suggests maybe we have something to look forward to.

Wayne Rooney, who has for the most part, taken the burden on his own shoulders of us not having an out-and-out striker in the squad since Ruud Van Nistelrooy’s departure, is hoping that the deal goes through.

“There would be an extra burden if we did not sign another striker,” said Rooney. “Carlos likes to drop behind a main striker, which is probably his best position, so maybe I would have to stay up a bit more. I would have no problem with that. But hopefully we can bring another forward in to strengthen the team. It would allow us to spread the matches out and make changes for certain games. But if that forward does not come in, I am sure we can deal with it.”