Rooney: We're Ready To Beat Chelsea At The Bridge 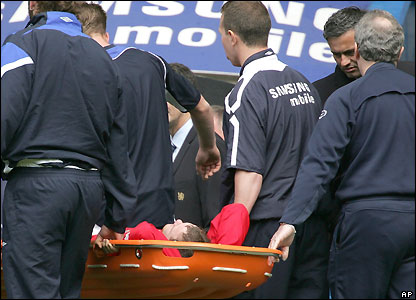 The one highlight of the demoralising 3-0 defeat at Stamford Bridge the year before last, which saw Chelsea lift the Premiership trophy at the final whistle, was the look on John Terry and Frank Lampard’s faces when Rooney lay in agony on the pitch. The game was already over at this point and I was just wishing the time away. We’d been outplayed and whilst 3-0 was perhaps a tad unfair, it was clear we were second best to Chelsea.

So with eight minutes to go until the end of the match, until the end of the season, Rooney clashed with Ferreira and broke his metatarsal. The World Cup was going to kick off in a few weeks and the Chelsea fans and the English Chelsea players knew their chances had just been halved. Wayne Rooney, who made all the difference to England in Euro 2004, and whose injury ultimately ended England’s hopes, was the driving force behind England’s World Cup campaign, but I don’t even think JT and Fattie could have predicted just how dire the England team would be without him.

So, it was successive titles for Chelsea, whilst United just had their League Cup to cling on to. It was a totally depressing day. The players Chelsea were already linked with instilled fear in us. They were already so much better than us and now they’re going to sign the likes of Michael Ballack and Andriy Shevchenko?

United had suffered two seasons of humiliation at the hands of Chelsea. Whilst we’d endured seeing a victory over us result in them lifting the trophy, the season before our players had to applaud them on to the field. Whilst I agree with Ferguson offering the same honour to Chelsea as Sir Matt Busby had done 50 years earlier, it didn’t make the occasion hurt any less. They’d already won the title, and with nothing to play for, they beat us 3-1 on our home turf.

Wayne Rooney has the same bitter memories of these games, and despite establishing ourselves as the best team in the country since then, Rooney is eager to inflict the same heartache on Chelsea. He can recognise how much it would mean to the fans to really rub our success in our rivals faces, so is hoping we can win the league at Stamford Bridge this season.

“If it was possible to win it at Blackburn, we’d take that,” Rooney said. “But if we can win at Chelsea it would be great for everyone at the club, especially the fans. We know that if we win our next two games then we are champions and it’s something that all the players are ready for. It’s always nice to win against one of your closest rivals, and to win at Stamford Bridge would be brilliant.”

Do you think United will win the league at Stamford Bridge?