Rooney Wind Up: Why Would I Be Bothered About Mid-Table City? 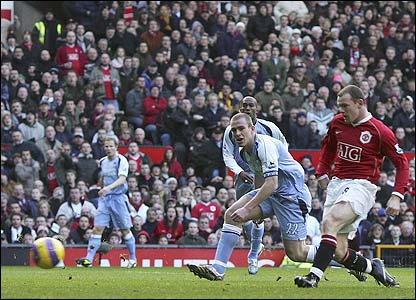 We saw Robinho attempt to get the mind games under way ahead of the Manchester derby on Sunday, reminding Ronaldo of the embarrassing defeat Portugal suffered at the hands of Brazil last week.

Wayne Rooney has got himself involved, claiming he couldn’t care less about City’s publicity, as they’re not winning anything and lingering about the mid-table. It’s 11th, to be exact, 3 points away from the relegation zone… but who’s counting?

“Sunday is a massive game,” said Rooney. “Yes, we owe the fans a derby win even though we did win two trophies last season. Losing both games was extremely disappointing. It is a massive game for the players, the fans and the club – especially after what has happened at City with the takeover. It will be nice to show them who are the kings of Manchester. I missed both derbies last season and that was really frustrating having to watch when you cannot do anything about it. I am looking forward to Sunday.”

It’s great to see Rooney’s passion for derby day, after our manager has seemingly taken his eye of the prize in recent years where this fixture is concerned, apparently with bigger fish to fry. Rooney’s attitude is just what we need to hear, a player who is totally up for the game and looking for a win to restore some pride after last season.

“It doesn’t irritate us that City are getting all this publicity,” he continued. “If they were winning trophies it would irritate me but while they are still lingering in mid-table I am not really too bothered about it. It is different to any other game. The atmosphere at City is a really good one. The players always get up for it. Our fans will push us on. If we can win, and I am sure we can, it will be a great result for us.”