Saha: Everton Move A Step Down 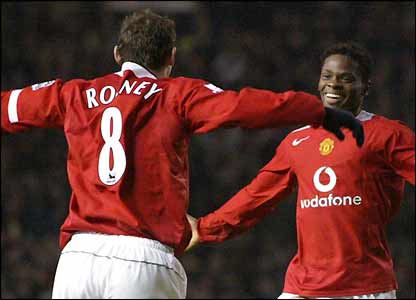 Three former United players made up the Everton starting XI today, the most recent of these to move being Louis Saha, who spent too much time on the treatment table to keep his place in our squad.

When fit for sustained periods of time, most recently for the first half of the 2006-2007 season, there was no denying his quality. He was the target man United were looking for and I will always have a lot of time for him due to his great attitude to playing whilst Ruud van Nistelrooy was still at the club.

However, if we are to compete for all trophies, we need a player we can rely upon. The season before last he missed the last two or three crucial months of the season, meaning we were playing European Cup and FA Cup semi-finals with just one striker, as well as the FA Cup final, and this proved costly.

Sir Alex Ferguson eventually ran out of patience with the French striker, some time after the majority of fans had, selling him to Everton in the summer on a ‘pay per play’ basis. Does Saha regret it? No. Does he understand why Fergie wanted to sell him? Yes. Does he know how to win his new fans over? Evidently not.

Saha is more than happy to sing our praises, reflecting on the really good times he had at United, and acknowledges that Everton is a step down for him. Not exactly what the Everton fans will be wanting to hear from their new signing.

“I had one choice to make over summer and I didn’t make a mistake,” said Saha. “Whenever you leave Manchester United it is a step down but, if we have to look at it this way, Everton is a good step down. There were some really good times (at United). Of course there were. It’s a great club, the number one in Europe, and it was great being part of such a successful team, but in the end, I could understand why the manager did not want to keep me any longer. I just guess I was unlucky.”