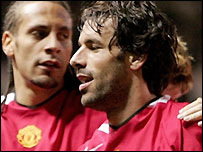 Before I say anything, let me make it clear for the whole time Fergie has been playing Saha over Ruud, I’ve been desperate to see Ruud start a game.

Whilst understanding why Fergie was playing Saha, because his scoring form was better than Ruud’s, I still figured that sooner, rather than later, Ruud had to come back in to the team, because he’s a better goalscorer. But Ruud hasnt had any serious competition for his place the whole time he’s been at United, so I could see the upsides.

However, we’ve seen in recent weeks United tear teams apart with Saha in the starting lineup. No, he’s not the sharpest striker going, and his finishing has a lot to be desired at times (but make no mistake, so does Rooneys!) but how many times recently have we seen Saha making clearing headers from the box? And how many times have we seen him coming in to the centre circle to pick up the ball and help set other people up? These are things Ruud rarely if ever does. With Saha playing more deeply, it gives Rooney more freedom to go forward, whereas with Ruud on the field, Rooney has to do the providing.

Sat in my seat before kick off last night, knowing that Ruud was playing again, I was really chuffed. He finished well, only for the goal to be ruled out for offside, but it was encouraging to see that he was still sharp. Then to score just before half time, which then ended up to be the winning goal, was extremely pleasing.

Dont get me wrong, I’m not even saying I definately want Saha to start over Ruud, but last night has changed my perspective a bit. It’s hard to directly compare the situation, considering Fergie made so many changes last night, but it’s made me realise Saha starting over Ruud isnt as bad as I thought it was.

It will be interesting to see who Ferguson prefers for the Bolton, Arsenal and Chelsea games!