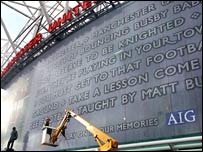 Whilst the Munich memorial picture which hangs from the East Stand is less than perfect, with the words originally printed incorrectly and an AIG logo situated at the bottom, there is no doubting it is an impressive site. With the 50th anniversary of the tragedy approaching, much of the red focus is on our players who lost their lives on return from their pioneering trip in the European Cup.

Many United fans have voiced their displeasure at the corporate logo getting a spot on the picture, feeling AIG has no place to be associated with the occasion. As I wrote about last week, the feeling of poor taste has spread amongst United fans, and a petition, currently showing close to 2000 signatures, has circulated in an attempt to get the logo removed.

United responded to the complaints, saying, “the commemoration of the 50th anniversary of the Munich air crash has involved many different groups including the club’s partners, who wish to pay their own tributes. Each group has chosen to pay tribute in its own way. It is entirely appropriate that a partner as closely involved with the club as AIG would want to remember that extraordinary team, cut down in its prime.”

There has also been major concern of how the blue side of the city will respond to the anniversary, with the derby day game being held on February 10th. City have anticipated a poor reaction from their fans, writing pleading letters to those with tickets to the game asking them to behave for the sake of Frank Swift and his family, who will be at the match.

Today, it has been announced that the memorial picture has been vandalised with paint bombs. United have responded quickly and restored the picture, but with the strong feelings against the AIG logo, it is not possible to rule out our own extremist fans from being the guilty party.

I’d like to think that only the bitters could be capable of such a disrespectful act and imagine it is them who are behind it. If that is the case, they’ve reinforced our opinion of them being complete scumbags, who have far too many fans who disrespect the Busby Babes.

However, if it is angry United fans behind this, then it is even worse. Whatever our feelings about the AIG logo, it would be completely unacceptable to deface the picture in such a way. It was only last week that David Gill suffered the wrath of United fans, who vandalised his home with ‘Judas Gill’ and ‘Glazers Out’.

Of course, it is impossible to rule any set of fans out, with Liverpool fans being no strangers to vandalising our ground. When playing Chelsea the FA Cup semi two years ago, they covered our ground with graffiti about Munich.

Club spokesmen, Phil Townsend, had this to say: “A couple of paint bombs were thrown at the Munich tribute on the east stand last night. It’s just a group of mindless idiots who have vandalised a tribute to the Busby Babes.” In response to questions about the AIG logo, he said, “It’s not an advert. It’s a tribute by one of our major partners and we are entirely comfortable with it.”

Who do you think is behind it?