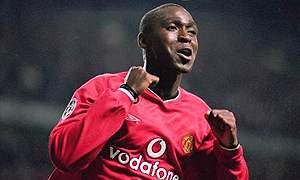 Andy Cole was a massive part of our incredible 1999 Treble winning team, scoring many important goals. The winner away to Juventus in the European Cup semi-finals, the equalisers at home to Arsenal and Leeds, as well as, most importantly, the goal that clinched us the title on the last day of the season, putting away a fantastic lob against Spurs.

My favourite Cole memory probably has to be the 5 goals he scored against Ipswich in that 9-0 battering. ‘Goal King Cole’ posters were being sold all around the ground and there really was the feeling we’d watched something special. Cole had only joined us two months previous to that, so the anticipation of what he would achieve was incredible.

In total, Andy Cole (or Andrew, as he now likes to be called) won five League titles, two FA Cups and the European Cup with United. However, like with most players who leave us, the only way is down, with him picking up just one more winners medal in the seven years since leaving us.

Roy Keane gave Cole a job after he was released by Portsmouth, taking him to Sunderland. However, he was loaned out to Burnley in February, where he scored 6 goals in 13 games. Last week however, he agreed a deal with Nottingham Forest in the Championship, although admits it’s what is going on at United which is keeping his interest at the moment.

“Manchester United is my team,” Cole said. “I’ve got my season tickets and my son loves to watch them. I want Ronaldo to stay because United are a special team and, as a season ticket holder, I want to still be watching him. If I can help Forest get a good result on the Saturday and then we go to watch Ronaldo on the Sunday, even better.”

Feels pretty nice to think of Andy Cole taking his lad to come and watch us play after all these years. Whatever happens with Ronaldo, at least we do have enough of the Sir Bobby Charltons, Bryan Robsons and Ole Gunnar Solskjaers who really do understand what this club is all about.

Andrew Cole, I salute you.