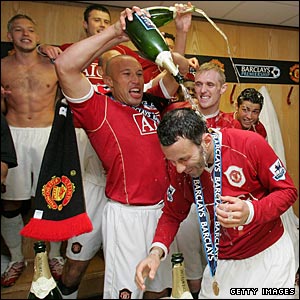 When news first broke that Mikael Silvestre had legged it away from City for a medical at Arsenal, United fans had a bit of a chuckle. Whilst a loyal servant for nine years, Silvestre had often been a weak link and was ridiculed by many of our opponents. A useful squad player but a disaster as a starting player in the centre. With Arsenal fans priding themselves on their “attractive football”, it was funny that their manager had actually paid money to take away one of our worst players. Given the fuss Ferguson made over Gabriel Heinze’s possible move to Liverpool, it certainly spoke volumes over what our manager expected Silvestre to achieve.

Still, the Arsenal fans flooded the blog, claiming it was a steal.

“Arsene Wenger can turn a mediocre player like Silvestre into a tremendous player.”

“I’m an Arsenal fan, and I think that its a pretty good signing for us. We need a bit of experience and he’s got that in abundance.”

“First Aaron Ramsey now Mikael Silvestre. WHAT NEXT? The title.”

“Decent signing for us gooners…with our slightly dodgy defence and frequent injuries, experienced cover on the cheap is fairly sensible.”

I know I wasn’t the only one thinking Arsenal fans would have been pissing themselves if this signing had been rumoured a week before it actually happened!

Silvestre has today spoken about the difference between United and Arsenal, although I think he sells United short a bit.

“At United, the squad is built in little stages but always around their pillars, Scholes, Giggs and Neville,” said Silvestre. “They are the club’s identity, their points of reference on the pitch and in the changing room. At Arsenal, it functions more by generations. There has been that of Vieira, Pires, Henry. Now it is that of Fabregas, Walcott, Song, Ramsey. We give responsibility to these youngsters very early and we let them grow together. At Arsenal, youth isn’t just an excuse.”

All you have to do is look at the team Ferguson played in the FA Cup semi-final to see that United also give responsibility to youngsters early on. Aged 17-years-old, Duncan Edwards made his debut for United, as did Ryan Giggs, as did Federico Macheda. It’s deep within the roots of this club to put faith in and play youngsters.

Regardless, with Arsenal travelling to Old Trafford for the first leg of our European Cup semi-final, Silvestre has admitted he will find it strange going to the visitors’ changing room.

“It is going to be weird going into the visitors’ changing room, to see the supporters and all the people who work at the club again,” he added. “It is going to be moving. Nine years at one club, it’s a long time, it is a part of my life. And it isn’t any old club, it is a legendary club. I could have stayed for my 10th year and had my testimonial. It surprised everyone that I moved but I wanted a new challenge. Ferguson did me a favour.”

Here’s hoping for a Silvestre penalty, he owes us one or two!