Small Details Make All The Difference 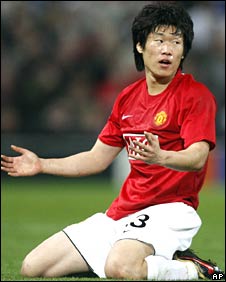 To finish the opening game of our Champions League title defence with a 0-0 is always going to be disappointing. Whilst missing a few players, we had enough quality on the field yesterday to beat Villarreal, especially based on the way our Spanish opponents played.

However, it was just ‘one of those days’. Had we won 1-0 and played the way we did against Liverpool, I’d be far more worried to face Chelsea than I am on the back of our performance last night.

The ball came to Rio Ferdinand by surprise in the opening minutes, giving him an opportunity to bury it in the back of the net.

Ji-Sung Park had his ankle trodden on by Capdevila in the box as he was chasing down the ball. The referee had a poor view of it, but the linesman looked at it clearly. Amazingly, he saw nothing wrong.

15 minutes later, Park is again fouled by Capdevila, who sticks his leg out in front of our Korean as he charges in to the box. Gets nothing on the ball and a goal kick is given.

Capdevila avoids a booking all match.

Cristiano Ronaldo hits the ball in to the ground, similarly to the tactic Ryan Babel used against United at the weekend. Unlike Babel’s effort, Ronaldo is straight to the keeper. A lucky bounce in either direction (as we saw at the weekend) would have resulted in a goal.

With eight minutes to go, Jonny Evans diving header comes back off the woodwork. A few inches to the right and it was a goal.

When luck is on your side, you win a game like tonight by at least three goals. When luck is against you, your side finishes the game with a point.

What I was looking for, more than anything tonight, was a performance, and that’s what we got. If you create good goalscoring opportunities, then sooner or later you’ll get the right result. United created 16 opportunities last night. If we create 16 chances at the weekend and score 2 of them, with Ronaldo and Dimitar Berbatov playing from the start, then we’ll be very happy indeed.

After some poor football from United over the past few weeks, it’s encouraging to see us play some great football and look like scoring again. Of course it would have been nice to get a win, but I’ll settle for yesterday’s draw if we pick up 3 points at Stamford Bridge!