So Bad They Named Him Twice Returning To The Premiership? 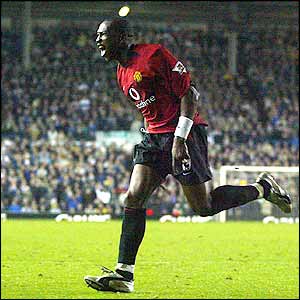 The year that Leeds were relegated from the Premiership, we played them in the 3rd Round of the League Cup. This was a day when our flops got the last laugh.

United went a goal down at Elland Road just after half time, before David Bellion equalised with ten minutes to go.

With nine minutes of extra-time played, Diego Forlan but United in front, only for Leeds to pull themselves level with six minutes of time remaining. The game looked certain to go to penalties, before a certain midfielder from Cameroon won us the game with three minutes left on the clock.

This was Djemba-Djemba’s highlight in what was otherwise a woeful eighteen months with Manchester United, who were desperately seeking a future replacement for Roy Keane.

United were looking to cut our losses, happy to recoup any money we could on the waste of space midfielder. When Aston Villa offered us £1.35 million for him, we bit their hands off!

Things have gone downhill for him since then, being loaned out to Burnley two years in to his Villa career, after starting just four games, before his contract was terminated.

It now looks as though Djemba-Djemba might be returning to the Premiership, with West Ham apparently showing interest.

“I am having a good season. I lost my way a bit when I signed for Manchester United,” Djemba-Djemba said. “However, I am a good player, you don’t play alongside Roy Keane and Paul Scholes if you are a bad player. I heard West Ham is interested and that means I am having a good season. I have unfinished business with the Premier League, so who knows? It would be good to go back there and prove myself.”