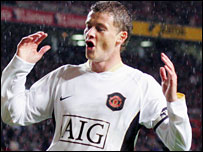 A couple of years ago, I wrote an article about the amazing comebacks of Manchester United, whether that be winning the European Cup just 10 years after the Munich Air Disaster or their ability to win games they have no write to. I also focussed on the magnificent comeback of Ole Gunnar Solskjaer, who had to contemplate that his career may be over, but still managed to regain fitness, as well as his place in the team, going on to win another league title with United.

In September 2004, when Ole had just been ruled out for the season, he said, “In my situation, I can only concentrate on myself and make sure I do all the right things in order to get back into the team. The thought of playing – that’s not to mention scoring – in that red jersey again is the best motivation in the world. I have been there and I will be back. I will score at Old Trafford again. That’s a promise to myself and to the Manchester United fans.” A year on, last August, Ferguson said, ”I’m not sure he’ll play for the first team again. You can’t be when a guy is 31 and has been out for a year.” And a year on from that, August 2006, Ole scores his first goal since his comeback. He bowed down to the United away fans before celebrating with his team mates.

In the interview that followed the game he said, “I waited a long, long time to celebrate with the fans after scoring a goal. The prospect of doing it was one of the major things that has motivated me over the past three years. Throughout all that time, the fans and the manager have supported me. They have shown patience and the gratitude I feel for that is difficult to put into words.”

This season, he has five goals in three starts (eight appearances), has got full ninety minute games under his belt, playing up front as well as on the wing, and looks hungry for more. We’ve waited a long time for this come back, sung his name every week at Old Trafford, all so desperate to have him back, and to see him play well. He’s surpassed even the most spirited fans’ expectations. Solskjaer is the comeback king, and as United keep marching on, the idea of seeing him lift the Premiership trophy seems more exciting than ever. It’s players like Solskjaer that help keep our club special, that keep the magic alive. He’s getting to do what we can only dream about, and he understands that. And long may it continue.

A couple of weeks after that goal at Charlton, he scored his first goal at Old Trafford since his return, in the Champions League against Celtic.

Another two weeks after that, he scored both goals in our 2-0 win over Newcastle in the league at Old Trafford.

He ended the season with an impressive 11 goals for United (as well as 2 for Norway), most notably his last minute winner against Aston Villa in the FA Cup. After previously thinking his career could be over, that he may have worn out shirt for the last time, it was incredible that he got to enjoy another season at the club, scoring for us in all three competitions. He left on a high, just as he deserved.