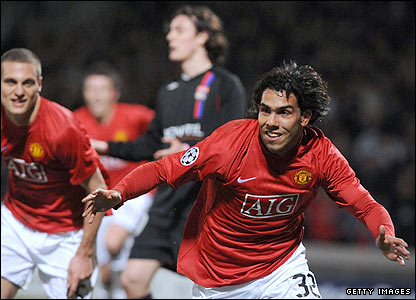 Ole Gunnar Solskjaer was one of the rare United players who fans of other teams admired. He was a hard worker with a great attitude to the game, a model professional. However rivals fondness of him often lessened when he was brought on off the bench against their team. Known as the “super sub” thanks to his ability for scoring so frequently when substituted on to the field, Solskjaer was a great reader of the game. Sir Alex Ferguson claimed Solskjaer was the greatest reader of the game at the club, spending 80 minutes weighing up the match before coming on and slotting in to the position he needed to be to grab a goal.

Solskjaer announced his retirement earlier this season, moving up to the coaching staff, after an eleven year stint with the club. His retirement has seemingly gone hand in hand with the arrival of new signing Carlos Tevez, who has already shown a knack of scoring goals at decisive times.

Fergie has praised the Argentinian striker today, stating what an important player he has been for us already this season. “I think he’s proved that this season,” he said. “That one in Lyon (1-1) was obviously really important to us, as were his goals at Liverpool (1-0), Tottenham (1-1) and at home to Chelsea right on half-time when we were searching for that first goal (United won 2-0). He’s proving to be an important player for us, no question. He’s now on 15 goals. I think that’s a great return in his first season with us so we’re delighted with him.”