The Last Team Shearer Wanted To Rely On 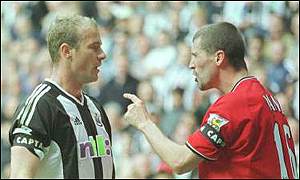 Alan Shearer turned down the opportunity to be a Manchester United player not once, but twice. He instead opted to play for his beloved Newcastle, where he won nothing but became a local hero.

He has since taken the job of Newcastle manager on a temporary basis, picking the only time when the situation is win-win for him. If Newcastle go down, then it will be argued he didn’t have enough time to turn things around. If Newcastle stay up, he will become an even bigger legend.

If United beat Hull, Newcastle will need to just pick up a point from their last game of the season, as they boast a superior goal difference to Hull. However, with the Champions League final three days later, it certainly isn’t down to United to control who goes down and who stays up.

Sir Alex Ferguson was criticised when he didn’t play his strongest team against West Ham on the last day of the season, when the Premiership title had been wrapped up a couple of weeks early. Still, we had an FA Cup final to play in less than a week later and we’d reached the semi-finals of Europe, meaning our squad was absolutely knackered. Why the fuck was it our responsibility to beat West Ham and save Sheffield United? They had their own 38 games to decide their fate.

This season there is a lot more at risk, with a bigger final to play with less time to rest than back in 2007. Why on earth should Ferguson put himself in a position where he should play in the final without the likes of Rooney or Ronaldo? We did our job in winning the Premier League. It is not up to us to do Shearer’s job in keeping them up!

A team of mixed Reserves and fringe team players took Everton through two hours of football a few weeks ago, so there’s no reason to believe we aren’t capable of putting out a team good enough to beat Hull. But essentially, who gives a fuck? Not me.

“What will happen is that he’ll rest a few, but whoever he puts in, will do his football club justice, as they always do,” said Shearer. “Listen, they’ve got a bigger and better squad than anyone else, so I’ve no doubt that Alex will put a team out which he feels is good enough to go and win at Hull.”

The question is, are Newcastle fans entertained? They didn’t want to the dull football of Sam Allardyce, they wanted to be entertained! Fat Sam steered Blackburn in to safety, now six points from the relegation zone, whilst Newcastle look likely to be relegated. Was the exciting football worth it? How entertaining will the Championship be?