The Magic Of Rooney's Birthday 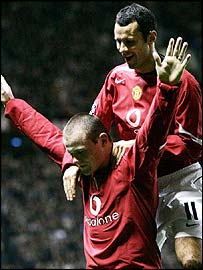 Over four years ago, I remember watching North West tonight and watching a group of lads kicking a football around on a concrete playground. The reporter was saying that one of those lads was tipped to play for his country in a friendly against Australia the following day. He was built like a man, powering through the other seventeen year old lads around.

Now this was the Everton lad, the one who scored that blinding goal against Arsenal five days before his seventeenth birthday. Arsenal had been ploughing through one of their unbeaten runs, and had gone thirty games without losing, then in the last minute, the ball fell to Wayne Rooney. He brought the ball down beautifully about ten yards outside the area, turned, and curled the ball in to the top left hand corner of David Seaman’s goal. It was inch perfect. “Remember the name, Wayne Rooney” the commentator said of the sixteen year old, as he ran over to the Goodison crowd. He was now the youngest player to ever score in the Premier League, and it was a real beauty.

Two years later, he was a Manchester United player, and as his nineteenth birthday approached, Rooney had his debut hatrick from the Champions League under his belt, but was yet to score in the league. Arsenal had been crowned Champions the season before, and were still amidst their unbeaten run. The United Arsenal match fell on Rooney’s nineteenth birthday, and a draw or a win at Old Trafford would see Arsenal go fifty games unbeaten. The imagined headlines were too much for me to bear. We’d played nine games in the league, picked up just fourteen points from twenty seven, and were already eleven points behind Arsenal. Roy Keane had been ruled out of the game due to flu, meaning Phil Neville filled in for us in the centre of our midfield. If ever we needed a birthday performance from Wayne, it was now, to salvage some self respect and some hope for the coming season.

The game resembled many of the United vs Arsenal encounters in the past, with the pressure on and tempers high. Before the half time whistle, the game threatened to boil over on a couple of occasions, but the first 45 minutes ended goalless with much anticipation place upon the second half. Rooney burst in to the box with twenty minutes to go, and Sol Campbell clumsily stuck out a leg. He got nothing on the ball, and also nothing on the player, but when Rooney hit the deck, Riley pointed to the spot. After the abuse Ruud endured the last time he took a penalty against Arsenal, with Keown, Parlour and Ashley Cole jumping on Ruud, hitting him, and shouting in his face, he was eager to put the ball on the spot, and make them pay. He sent Lehmann the wrong way and put United 1-0 up.

Moments later, Ronaldo burst in to the box, looking for a second, and Ashley Cole brought our young Portugese winger down. A clear cut penalty, but Riley wasn’t going to be awarding that after the penalty we’d already got. United were desperate to find that second goal, and in the last minute of the game, it came. Saha played the ball to Smith, who had only been on the field for five minutes, and selflessly played across the goal for Rooney tap in.

It is quite remarkable aged just twenty two Rooney has achieved all that he has, and I talk in terms of performances and goals, as much as I do individual and club awards. Last season, he scored two goals in a European Cup semi final against AC Milan, two goals in the FA Cup semi final, and two goals in the European Cup quarter finals. He scored the goal which turned United’s season around, as we went 3-2 up on that special day against Everton. He was United’s joint top scorer alongside Ronaldo, who was widely said to be the best player in the World last season, in a season when his team were crowned Champions. He has been awarded by Match of the Day with Goal of the Season twice (in just the five seasons he’s played Premiership football), and has won the PFA Fans and Young Player of the Year.

To have such a list of achievements aged just twenty two should be enough to make the rest of us feel rather insignificant! It is his hunger for the game as well as his incredible ability which have pushed him to achieve so much so quickly. So, Happy Birthday Wayne Rooney, and here’s to the even brighter future you have ahead of you.