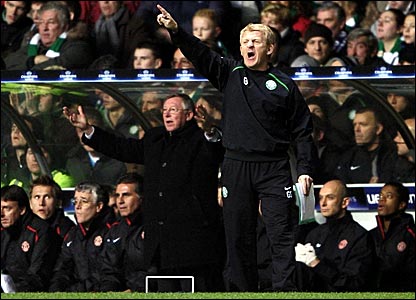 For the second time in three seasons, Manchester United have been drawn in the same group as Celtic. Last time around, we beat them at Old Trafford in a close game which ended 3-2, but lost to them away after Louis Saha failed to score a last minute penalty.

Celtic manager Gordan Strachan, who played under Sir Alex Ferguson at both Aberdeen and United, is up for the battle, playing down the tension between the two men. Has Fergie forgiven and forgotten though?

Whilst at Aberdeen, there was a clash of personalities between Fergie and Strachan, with the player resentful of the manager’s harsh manner. However, with Strachan at the centre of the team and Ferguson at the helm, they enjoyed a lot of success in Scotland, breaking the traditions of the Old Firm, winning two league titles, three Scottish Cups, the European Cup Winners Cup and the European Super Cup together.

But Strachan wanted out and behind the clubs’ back tried to push a move to Cologne. He agreed to play for them the following season without consulting the manager. Unsurprisingly, Fergie was having none of it. Strachan was sold to United for £500,000, but of course, the story didn’t end there.

They were re-united when Ferguson became our manager two years later. Strachan’s form deteriorated within the next couple of seasons, with the Scot losing out on his first team place. “There was little evidence of the zest and cocky assurance that characterised Strachan’s play in Scotland,” Ferguson said in hindsight. Again, Strachan went behind his new club’s back to seek an exit, this time talking to Lens without Ferguson’s permission.

“I always knew there was a cunning streak in Strachan,” Ferguson wrote in his autobiography, published in 1999. “But I never imagined he could pull such a stroke on me [negotiating behind Ferguson’s back] after everything I had done for him. I decided that this man could not be trusted an inch. He could break his word without a qualm, it was sickening. I would never be able to have full trust in Strachan again and I wouldn’t want to expose my back to him in a hurry.”

That was almost ten years ago now though and Strachan claims the two of them have a better relationship these days.

“All the history between me and Fergie is an irrelevance to Wednesday’s game,” Strachan said back in 2006. “He sat in my office recently for 40 minutes and we laughed and joked and talked about football and the old days.”

Whatever the state of their relationship now, it’s undeniable that both men will be desperately seeking a result against each other tonight.

Ahead of the match, Strachan was asked about facing his former manager, to which the Scot responded light-heartedly.

“If we are playing one-for-one in the middle of the park then I’ll beat him,” Strachan joked. “I’m fitter than him, there’s no doubt about it. He wasn’t a good defender and I was quite a good attacker so it will be no problem. So if it was me and him playing tomorrow then I would be delighted. But unfortunately he has a lot of world class players behind him.”

On a more serious note, Strachan spoke at length in praise of United, talking of the difficulties of playing at Old Trafford and the challenge his players expected.

“We are going to play the best team in Europe,” Strachan added. “They are the champions of Europe and the champions of England and they have some of the best players in the world. I don’t think they were English champions two years ago but they are now and they are European champions as well. The younger players in their side have two years more experience and the more you think about it, the scarier it gets. You have to face Manchester United with ability, pace, strength, height and character. Trying to find all those things in eleven players is very, very hard. But the players know what’s coming and they are looking forward to the challenge. It’s in the traditions of both clubs to attack and try and entertain so we will do our best. A lot of teams come here and say that but traffic seems to go the one way. I’ve heard people saying that they are sitting in at Old Trafford. No they’re not – they just can’t get out! There is a difference.”