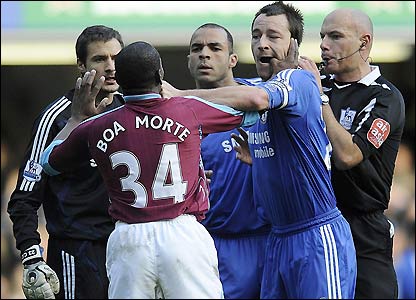 John Terry’s appointment as England captain has got me thinking about what a ‘good captain’ should be. The man who famously dropped David Beckham, before realising the errors of his ways (albeit, too late) and lost his job because of it, has made yet another controversial decision on awarding the captaincy to Terry.

Of all the qualities I believe to be important, Terry is lacking in far too many of them, letting down his team and team mates are too many occasions. I suppose then it’s fortunate he’s not captain of any team I have hopes of doing well!

Strong: Losing is painful and feeling at fault for losing hurts all the more, but there is no excuse for Terry’s self-absorbed behaviour following the penalty shoot out in Moscow. He had a team full of crushed players that evening and wasn’t the only man feeling the guilt from missing a penalty, but did Terry behave like a captain? Rallying his men together? No, he sat by himself crying. In what kind of warped world is that the behaviour of a good captain?

There is no denying that Terry loves Chelsea and his TinyTears impression has been excused by this. Fine, he cares, that’s why he’s crying, but does caring so much that you turn in to emotional wreck whenever you lose qualities of a good captain? Is it fuck.

In all the years of following United, the highs and the lows, I’ve never seen such a self-pitying act as Terry’s display in Moscow. United have lost finals and semi-finals, but Cristiano Ronaldo is the only player I can recall making such a show of himself, and he’s as selfish and self-obsessed as they come. Terry is emotionally weak, just like our very own Ronaldo. Can you imagine the likes of Roy Keane bursting in to tears because United lost a match? Roy always put the team first, shown best in the self-sacrificing performance he put in against Juventus to get us to the European Cup final in 1999. Had Terry received the yellow card that would see him suspended the final, no doubt he’d be subbed due to his inability to see past his tears.

When England lost to Portugal in the last World Cup, and Terry sat on the deck, crying, it was Gary Neville who rallied the troops. Armband on, he comforted those who were crying, forgoing dwelling on his own personal emotions. As he supported those who missed the penalties, putting his arm around a crying Owen Hargreaves, Neville had to know this was probably the last World Cup he was going to play in. There was no time for tears though, because as captain, he had a job to do. His team mates came before him. That is the behaviour of a good captain.

There when you need him the most: England were playing in their crucial last qualifying game against Croatia. Their opposition were already threw, so a draw on their home turf would have been enough for England. The back four was rocked with injury and suspension, and Steve McClaren opted for an inexperienced and unproven keeper to go behind them. So where was captain JT? Unavailable. Fair play, injuries are injuries, and if he could have featured he would have done, right? WRONG. Terry was so injured that he couldn’t play for his country when they needed him most, eventually losing because of dreadful defensive errors, but just three days later, was travelling up to Pride Park with Chelsea.

John Terry played for the full 90 minutes just days after not being able to feature at all for his country. England now couldn’t feature in Euro 2008, but at least Chelsea picked up a cleansheet and 3 points at the weekend, eh JT?

Michael Essien got sent off in that game and John Terry verbally abused the referee, surrounding by his baying team mates.

Setting the right example: Of all the captains in the Premier League, none seem to believe they are beyond the law as much as John Terry. Maybe it’s part of his natural character or maybe it is a cockiness instilled by Jose Mourinho, but Terry’s behaviour on the pitch is nothing short of appalling.

If he himself is not verbally abusing a referee, he is standing back and letting his team mates do it. With Chelsea being fined far more than any other club over the past two or three seasons for failing to control their players (and on the pitch, it is the captain’s responsibility to claim this control), it speaks volumes of Terry’s failure to behave as a captain should.

John Terry watched Ashley Cole reacting ridiculously at Tottenham Hotspur, which really brought attention to the way some players were behaving in regards to the referee. There was the incident at Derby following Essien’s red card, which Chelsea pleaded guilty to. Then there was John Terry trying to take the red card from the referee’s hand at Old Trafford after John Obi Mikel’s sending off. Before this was the mass brawl in the League Cup final against Arsenal, then the fines that came following their behaviour at West Brom and Fulham. This is just going back to 2006. Chelsea players have little to no discipline, and that is a direct result of Terry’s poor leadership.

For all Rio Ferdinand’s wrong-doings, they are all a part of his past. His behaviour on and off the field over the past year or more has been exemplary, in contrast to a whole host of misdemeanours littering Terry’s recent history. Yet Fabio Capello has today strangely picked Terry ahead of Ferdinand as captain. Whilst England aren’t really any of my concern, our players are, and I feel for Rio who will obviously be gutted to lose out. He’s not getting any young, meaning this was his last opportunity to claim the captaincy on a permanent basis, and he’s missed out.

But the upside of this is business can resume as usual, with me finding amusement in all of England’s failings, which of course there will be many, with a weak captain like Terry at the healm and a manager lacking decent judgement like Capello. Never mind Rio, you’re too good for those mugs!