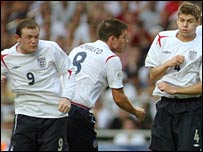 United fans’ heads are buzzing with the latest ludicrous comments to come from Sepp Blatter, likening Ronaldo’s situation at United to that of a slave. Football today is in a far more grave state that we ever could imagine with men like him and Michel Platini in charge.

However, before today, his most controversial argument had to be his persistence in implementing a restriction on how many foreigners could play in each team. Whilst rejected outright by the EU as “direct discrimination”, Blatter has continued to push this idea.

He claimed a motivating factor for this was England’s recent failure to qualify for Euro 2008, which he believed to be down to the foreigners we had in our league. This idea was met with some approval, particularly from players inside the England camp.

“I think there is a risk that there are too many foreign players coming over, which will affect our national team eventually, if it’s not doing so now,” Steven Gerrard said. “I’m sure it (a quota) will definitely help our national team, if that’s the case, and we want as many home grown players playing in the league as possible. As an England player we want top players involved in the squad and I’m sure that will help.”

However, if we delve a bit deeper, and look comparatively at another leagues in Europe, the revelations are rather surprising.

“Football is unpredictable and sometimes without any logic but it is a fact that in the strongest English teams the best players are not always English,” Blatter said. “So where are the best English players coming from?”

As a club over country man, the state of the English national team is not much concern of mine. Whilst I like to see local and English talent in my team, for the sake of relating to the players as much as anything else, I’ve been more than happy to have Eric Cantona, Ruud van Nistelrooy, Cristiano Ronaldo, and the like, at United. Above all else, I want to see my team successful. I want us to challenge for the major trophies every year, and if combining foreign talent with English players achieves that, then I’m all for it.

However, Blatter’s on my hit list at the moment and I’ll take any excuse I can to have a pop at him.

If the English national side was filled with a bunch of average players, then it would be easier to see Blatter’s argument. However, if you look at the starting XI, they measure up, player for player, against the top national sides in the World. The weaker positions are goalkeeper, right back, right winger, and striker, though other than that, when you look at how the other players perform for their domestic side, they are up there with some of the best for their positions.

Rio Ferdinand, John Terry, Ashley Cole, Steven Gerrard, Owen Hargreaves, Frank Lampard, Michael Carrick, Joe Cole and Wayne Rooney have all been exceptional players for their clubs, but typically don’t replicate anything of their club form when representing their country.

Many would argue that it is not the players who are lesser than their national rivals, rather their management and attitude towards representing their country which are to blame for their poor form.

When thinking about Blatter’s point about the best English players, I decided to take a look at last year’s FIFA World Player of the Year rankings, where the votes come from coaches and captains of international teams.

When looking at the the Premiership players which featured in the top 28, we can see that 8 of them made the cut. In order, they were Ronaldo, Drogba, Gerrard, Rooney, Essien, Cech, Lampard and Terry. Half of the best players coming from our league are English.

In comparison to Italy, an argument in support of foreign quotas arises. Of the 6 players who feature, 4 of them are Italian. As the current World Cup holders and Euro 2008 finalists, it certainly suggests that their national side is benefiting from their homegrown talent.

However, when we look at the players who are from the Primera División, the domestic league of the country who just won Euro 2008, we see a very different story.

10 players from La Liga featured in the same list, in order, Messi, Ronaldinho, Henry, Cannavaro, Eto’o, Riquelme,van Nistelrooy, Deco, Marquez and Torres. In contrast to the 4 out of 8 players ranking from the Premiership being homegrown, just 1 out of the 10 players from La Liga is Spanish, and he came in 26th out of 28. Gerrard (6th), Rooney (13th), Lampard (19th) and Terry (23rd) all finished ahead of him.

If we look at this logically, it suggest there is absolutely no correlation between the best players in each league being homegrown and their relative success nationally. If the current best national side in Europe have just 1 of the best 10 players in their league originating from that country, there is nothing to suggest that if England placed more emphasis on nurturing English talent, rather than buying talent from abroad, that they’d be in any better a situation now.

All that can be shown is that by implementing this quota, shunning talent from abroad in preference for English players, our league and our domestic sides would be weakened.

FIFA and UEFA are certainly not impressed that we had an all English European Cup final last season, and that for the two previous seasons three quarters of the semi-finalists sides came from the Premiership. It is certainly no coincidence that Blatter’s plans for this foreign quota came in to being when English sides started to show their dominance in European football.

Last year, the Premier League responding to Blatter’s proposal, saying we strive to have the best players in the Premiership, with a mixture of both foreign and English talent. “Clubs are making huge investments in their academies. Academy players are coming through at first-team level and national-team level,” said its spokesman, Dan Johnson. “They have to be at the requisite standard. It’s better to have quality youngsters coming through than being forced to play players who frankly aren’t up to playing Premier League or even national level.”

The best English players from our league represent the best teams in our league. Of the 22 players to start in this year’s European Cup final, 10 of them were English. It is not a case of the most successful teams in England being those that overwhelmingly consist of foreign players. United and Chelsea combine some the best English talent with some of the best foreign talent, and it produces successful formulas, and doesn’t that just get on Blatter’s tits.

For as long as the EU stay strong on the equal opportunities stance in Europe, and as long as teams can fight off the bullying tactics of Real Madrid, despite Platini and Blatter’s best efforts, then the Premier League will remain as it is… the strongest league in Europe. And as current Champions of that league, it only says great things about the quality of Manchester United.