The South American Curse Is Over

There was a time when Manchester United fans cringed whenever we were linked with a player from South America, following a dreadful history of players originating from the continent playing in our shirt.

However, following the emergence of Carlos Tevez, Anderson, the Da Silva twins and Rodrigo Possebon, is it safe to say the curse is over? 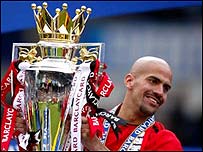 Veron joined Manchester United as one of the most highly rated midfielders in the World, which lead to his massive £28.1 million transfer fee. He had been inspirational in Lazio’s treble the season before and was later named by Pele as one of the greatest living footballers.

After winning the Champions League in 1999, Ferguson wanted to build on that great team to ensure another European title and Veron seemed like the obvious answer.

After a bright start with United, he seemed to fade away somewhat, with Fergie struggling to find the best position to play him in. He just didn’t click with our squad and it was difficult to play him where he would perform at his optimum level.

The United midfield had revolved around Roy Keane’s strength and Paul Scholes’ creativity for years, and Veron failed to stamp his mark on the team.

He suffered from the reverse of most English internationals, able to turn it on when playing for his country, but was lacking influence when playing for United. He went missing in the big games against Arsenal and Liverpool that season, of which we lost, which did not go down well with our fans.

“On you go,” Ferguson said. “I’m no fucking talking to you. He’s a fucking great player. Yous are fucking idiots.”

Fergie getting irate was a clear indication of Veron’s failure to fulfil potential. He was right, Veron was a great player, but he just couldn’t seem to replicate that at United.

His second season was better, putting in some great performances in the Champions League and becoming more accustomed to Premiership football, however his influence was still nothing like that of his reputation for his country and as a Lazio player.

United won the league that season, after a storming finish to the season which knocked Arsenal off the top of the table, but it would be hard to claim that Veron played a big part in that success.

He suffered from a recurrence of an Achilles injury, as well as a broken foot, which of course will have had some impact on his performances, but not enough to warrant the lacking input he had in our team.

He was widely considered the biggest flop in Premiership history… before a certain Ukrainian grace our shores.

Following a £7 million move, it took Forlan a massive 8 months to score his first goal for United, a later penalty against Maccabi Haifa.

Whilst he certainly had his high points since then, namely the two goals he scored in our 2-1 victory over the dippers, which lead to his chant: “Diegoo, wooah, Diegooo, wooah, he comes from Uruguay, he made the scousers cry.”

Then there was the time he scored a screamer against Southampton, which followed with his usual goal celebration of removing his shirt. However, by the time of the restart, he still hadn’t been able to put his shirt back on. Fumbling with it, he still managed to track back and make a timely tackle.

Still, these are probably the only highlights in his time at United, with the Uruguayan widely being regarded as a flop. Simple tap ins seemed to be beyond him too frequently and following 17 goals in 95 games he was sold. 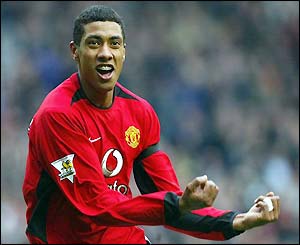 Part of Luis Filipe Scolari’s World Cup winning squad, citing his “tactical” ability for the player’s inclusion in his squad.

The Telegraph reported on the influence Kleberson had on Brazil winning the World Cup, stating: Some would say the job he did for Luiz Felipe Scolari was fundamental to Brazil’s success. The coach started the tournament with Middlesbrough’s Juninho in midfield and, although three matches were won, an imbalance became apparent against Costa Rica, where victory was secured only after Kleberson had been brought on.

Scolari himself called Kleberson the “driving force” in the team, so it is no wonder Fergie bit Atlético Paranaense’s hands off when he became available on the market for £6.5 million.

However, the lad couldn’t cut it in the Premiership at all, making just 25 appearances for United in his two seasons at the club. He demise began, with him losing his place in the Brazilian team, before we made some money back from him when he signed for “big club” Besiktas in Turkey.

However, our fans haven’t forgotten about him, with his name being sung every week!

Does this mean the curse of South American players at United is over?