The Stats Which Prove United Will Succeed 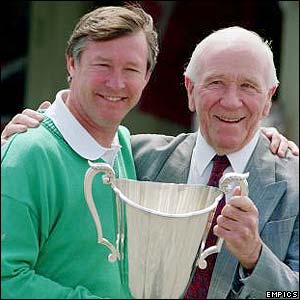 United have faced quite a bit of stick this season, and rightly so in my opinion, for the lack of goals we’ve been scoring. I was the first to criticise Chelsea the two seasons they won the league after the amount of 1-0’s they scraped out to aid them on their journey of lifting the trophy, and I see no reason why United should be exempt from that criticism now. Of course, the reasons why we have been scoring few are different to why Chelsea were getting their results. We’ve been without Ronaldo, Rooney and Saha, our highest scoring players, for large proportions of the season already. This doesn’t effect just the games they are missing, but there is then a delay on the goalscoring due to them finding form again (which has certainly been the case for Ronnie and Rooney, not so much for Saha). Whilst Chelsea’s style was defensive and controlled, United have been on the attack, but haven’t had the right players on the field to put the ball in the back of the net. Regardless, as United fans, we expect to see our team getting by with something more than a 1-0 win. Even with our main goalscorers missing, the amount of chances we are creating every match should be finished off by someone.

In our opening game of the season against Reading, we played with Giggs and Rooney up front, only to see Rooney subbed off at half time due to injury. Rooney was replaced with Nani, meaning we were left with only wingers playing as our strikers. Still, we had 24 shots (9 of those on target) and Giggs saw a volleyed attempt come back off the woodwork. In the next game away to Portsmouth, we were forced in to playing Tevez up front alongside Giggs, despite him not being match fit after going a month without football. We managed 14 shots (7 of those on target) but again came away with one point with the game finishing 1-1. Next was our trip to the Council House, where we had arguably our best performance of the season so far, and the match ended with no points for us after losing 1-0. This time we were missing the suspended Ronaldo as well and totalled 14 shots (3 of those on target).

With the players we have in this team, the goals will come, that is not up for debate as far as I’m concerned. You can’t have the skill and creativity of players like Rooney, Tevez, Saha, Ronaldo, Giggs, Scholes, Nani and Anderson and go too long without banging them in. When the first XI is better established, and when the new players click, the goals will come. That is the United way.

When we talk about “football taught by Matt Busby”, we’re talking about the exciting, goal-filled football we have become accustomed to as United fans. When Sir Matt’s side won the league in 1956 they racked up 83 goals, averaging at 1.98 goals per game. The following season they bettered this with 103 goals, averaging at a massive 2.5 goals per game. When Busby won the league again in 1965, we averaged 2.1 goals per game, and when we won it again in 1967, an average of 2 goals per game. Clive Tyldesley hit the nail on the head that night in 1999 at the Nou Camp when he proclaimed “they always score.” That’s what United do, and have always done in the peak of their success, score a hell of a lot of goals.

So for now, we’re treading water. If we can grind out three points and a 1-0 every week whilst waiting for our team to establish themselves, then I am happy. If we went through an entire season of 1-0s and won the league at the end of it, I would have to agree with Rio, and say that I still would be happy. In the years we waited between winning the league in 2003 and 2007 we were taught a serious lesson. It didn’t matter who played the most attractive and exciting football for the majority of the time, what mattered was who could pick up three points on a regular basis. I never thought I would be the person who agreed that three points is more important than playing great football, but in this day and age, that is the way it has to be. However, I don’t think there should or has to be a compromise, not for United at least.

Our greatest period of domination has been since the Premiership started fifteen years ago, where we have picked up nine league titles whilst all other teams collectively have won six. In that time we have scored 1,141 goals. That means an average of 1.9 goals a match. Can you believe it? Over a period of fifteen years, we have managed to average almost two goals a game. It’s phenomenal when you think about it.

So whilst the ABUs will whinge, and whilst some reds will worry, I sit back and relax with anticipation of what is to come. You can never count your chickens, and no title is ever won in October, but the fact that we are second in the league after playing, by our standards, pretty average football, fills me with massive hope of retaining our title. This of course has been aided by the recent demise of Chelsea, and to some extent, Liverpool. Both teams were tipped to be our fiercest title challengers, but neither have struck me with any kind of fear. I am not forgetting Arsenal, of course not, but I have ruled them out time and again. They certainly are playing great football, and have the quality there to do well. Do they have the strength of character, the ability to beat great opposition, and depth of squad to win the league? I don’t think so. Just as I don’t think City, who are one point behind us, and three points behind Arsenal, have what it takes to go the distance. Great starts and great football do not guarantee a league title, and Arsenal, in my opinion, are lacking the experience of winning a title within their players. If I had a pound for every Arsenal player who has quoted “You’ll never win anything with kids” to me when I’ve said that, I’d be a rich man. The difference is, this Arsenal team does not have an Eric Cantona, Steve Bruce, Gary Pallister, Denis Irwin, Paul Parker etc.

So United fans, relax a little, and take the pressure off. As Champions of course we have high expectations. Just as we could play free flowing football without the pressure of being favourites (and in fact, completely written off as finishing forth) at the start of last season, Arsenal are enjoying that luxury now. But our time to come good is upon us, and sooner or later, we’ll see the goals pouring in. And you can hold your breath on that one!