The Summer of Spain's Highs and Lows 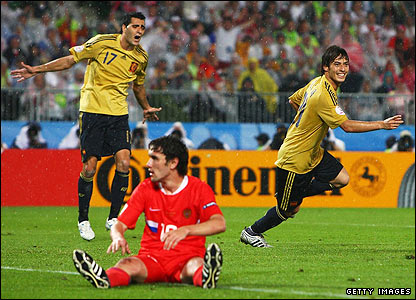 Spain were worthy winners of this year’s European Championship, boasting an array of talented youngsters as well as sturdy experience.

They finished top of their group, winning all three games, scoring an impressive 8 goals. In the quarter finals they took on World Champions, Italy, with the game finishing 0-0. Italy played for the draw, doing all they could to extinguish the flair and excitement of the Spanish team. The Italians paid the price for this though, losing out in the penalty shoot out they were banking on winning.

In the semi-finals Spain faced Russia, who’d knocked out the previously incredibly impressive Dutch in the quarters. Again though, the Spanish team were too much for them, winning easily in the end, with United target David Silva scoring the third in a 3-0 win.

Fernando YSB Torres scored the only goal in the final, crowning Spain European Champions in a 1-0 win over Germany.

This was just one of the highs and lows Spain have experienced this summer, but it appears as though they will be approaching the Autumn on a downer, if their antics at the Olympics are anything to go by!

Rafael Nadal beat Roger Federer, who has been number one in the World for over four years, in the final of Wimbledon, continuing the great run for Spain.

Real Madrid president, Ramon Calderon was in the crowd that day, cheering on Nadal. It appeared then that the Spanish giants were going to get their hands on Manchester United’s prize asset, Cristiano Ronaldo.

However, things have gone sour for Spain since then. Ronaldo confirmed that he was rejecting a move to Real Madrid, preferring to stay in Manchester, and now, their Olympic basketball team have made a total show of themselves.

With the Olympic games taking place in China, the Spanish basketball team decided to go with the ‘slit-eye’ look in their team photo. Marca, who have been the bane of our lives this summer, printed the photo as an advertisement for Spanish sports. In the light of the criticism, some of the players claimed they felt uncomfortable posing in such a way, whilst others didn’t see the problem with the picture.

“We thought it was something appropriate and that it would always be interpreted as somewhat loving,” one player said. “Nevertheless, some of the European media did not see it this way.” Oops.

How will the summer end? With Valencia surrendering the services of Silva to United? Here’s hoping Spain’s downwards trend continues…