Tired of the Lies: Keane vs Haaland 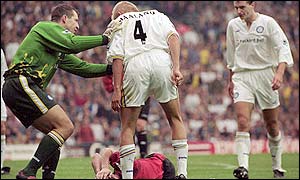 Cristiano Ronaldo spoke out at the weekend about the poor treatment he gets from the referees in this country, claiming he will end up like Arsenal’s Eduardo, who suffered a broken leg, if the referees don’t offer him better protection.

United are the most fouled team in the league this season, despite the inaccuracies Arsene Wenger was trying to pass off as “facts” a few weeks ago, and our fans are used to seeing Ronaldo get kicked from pillar to post every match he plays. As the most fouled player in the Premiership last season, whose crippling challenges are met with cheers and jeers from the opposition fans, Ronaldo is right to feel as though the referees aren’t giving him enough protection. If they were, he wouldn’t repeatedly be fouled. If players who intentionally kicked at him and tripped him were dealt with appropriately, then we would see a decrease in the fouls committed against him.

However, on this blog and football forums, I have seen a lot of talk of Roy Keane and Alfe-Inge Haaland in response to United fans questioning the treatment of Ronaldo. It’s as if because our former captain, who left the club in 2005, was guilty of a horrendous challenge, that now United have no place to complain and worry about one of our players. In fact, that challenge from Keane than ended Haaland’s career is thrown back in our faces an awful lot. It makes me wonder what rival fans would have to throw at us if they knew the truth about Keane vs Haaland.

The Keane vs Haaland saga began in September 1997, when Keane injured his cruciate ligaments in a challenge with Haaland, who then played for Leeds United. As Keane lay in agony on the ground, Haaland leered over the player, shouting at him, accusing him of feigning injury.

Keane was left to wonder if he would ever play the game again. He missed out on the rest of the season. Without his leadership, United squandered their lead at the top of the table, allowing Arsenal to lift the Premiership trophy.

After a year of hard work, patiently putting in time on the training ground, Keane returned to the first team at the start of the 1998-1999 season and was instrumental in that Treble winning year.

However, Keane hadn’t got over Haaland’s remarks, with the idea of a player faking injury a topic which has irked Keane throughout his career. He responded furiously when fans in Ireland claimed on occasion that he was pretending to be injured to avoid International duty. To think that Roy had a whole season of no playing time, left to dwell on the words Haaland shouted at him, as he lay in agonising pain at Elland Road, goes some way to explaining what was to happen a few years later. 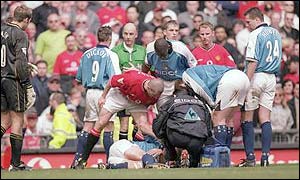 In April 2001, it was derby day at Old Trafford, as United closed in on their third successive title win. United took the lead with twenty minutes to go, only for City to equalise six minutes from time. Two minutes after the equalising goal, Roy Keane was guilty of one of the ugliest scenes we’ve seen in Premiership football. Keane was on the ball, approaching the City box, and Haaland came in to make the challenge. No thoughts on the ball or the game, Keane stamped his studs in to Haaland’s knee. He was given a straight red, marking the end of his season.

There is no defence of Keane’s challenge, no excuses, no reasoning, just an explanation. The very thing Keane despised, Haaland accused Keane of, as he lay prostrated on the ground, wondering whether he would play football again. Keane spent four years waiting for his opportunity to meet Haaland again and it clearly looks as though he spent that entire time knowing he’d cause some damage when the reunion finally happened.

Now, I have no problem with the criticism directed at Keane for this challenge. He deserves criticism. If another player did that to one of ours, whatever the reason, we’d be livid, so the rules cannot change when it’s a red dishing out the challenge. However, what I do have a problem with is this repetitive talk that Keane “ended Haaland’s career”. That certainly could have been the result of a challenge like Keane’s, but it wasn’t.

The challenge took place on April 21st 2001, after a midday kick off. No doubt Haaland was in a great deal of pain and no doubt the replays show a player who would lucky to play the game again. However, just four days after the incident, Haaland played for Norway against Bulgaria, and was subbed at half time. Three days after this, so the following Premiership weekend after derby day, Haaland started for City against West Ham at Maine Road, in a 1-0 victory, courtesy of an own goal.

Haaland himself has admitted that it was an injury to his other knee which caused him to call it a day on his career, after Haaland played just a further four games for City in the following season, after the blues had been relegated.

There’s so much talk about dangerous challenges at the moment, with Sir Alex Ferguson slating referees’ boss Keith Hackett all season for not instructing his referees to deal with two footed challenges appropriately. This criticism continued at the weekend following a poor refereeing performance from Martin Atkinson in our defeat to Portsmouth in the Cup. Sixteen fouls were committed against United yesterday, with the refereeing deeming it necessary to book just two players. The most remarkable decision was to wave play on after Distin body checked Ronaldo, making no attempt to play in the ball inside the six yard box.

Roy Keane was dealt with appropriately in 2001, being handed a 5 match ban as well as a £150,000 fine. It is his challenge against Haaland, which most people inaccurately call a career ending challenge, that is reflected on constantly. Not a lot of attention is given to Michael Brown’s disgusting challenge on Giggs last season, which was given nothing more than a yellow card, but had all the potential of Keane’s challenge to be career ending. Equally, Michael Ball’s horror stamp against Ronaldo dropped out of the spotlight as soon as it arrived.

For as long as the FA allow players like Gallas to kick Nani with no consequence, dish out a regular three match ban, the same punishment for a player making a harmless but clumsy challenge as the last man, for disgustingly violent behaviour like Ball on Ronaldo, then we will continue to see players getting lumps kicked out of them. In reference to Hackett, Ferguson has correctly accused him of not doing his job. Hackett’s referees are allowing players to go around intentionally kicking and fouling others with no punishment to act as a deterrent.

Keane didn’t end Haaland’s career, but if every player who intentionally went out to hurt someone as Keane did, was dealt with in the same way Keane was, football fans, managers and players would certainly have less to fear and worry about.

What do you think about the current state of the FA?