Today's Round Up: Richardson, Andy Cole, Phil Neville and more...

It’s a rubbish weekend when United aren’t playing. Having to wait until Monday to see our lads in action makes for a pretty boring Saturday. 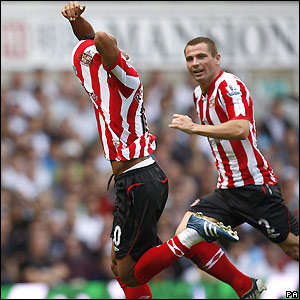 Roy Keane clocks his first victory of the new season against Tottenham Hotspur at White Hart Lane. Former United winger and waste of space, Kieran Richardson, opened the scoring with a good goal, before new signing Djibril YSB Cisse scored the winner, after Jermaine Jenas had previously levelled the score. The home fans booed off their team in a game where United target Dimitar Berbatov didn’t even feature in the squad. It’s going from bad to worse for Spurs.

Phil Neville had one his ‘moments’, handballing in the area and giving away a penalty against West Brom, however they went on to win 2-1 regardless. Phil might want to rethink the Alan Smith stylee bleached blonde hair as well!

Newly promoted Hull got a point against Paul Ince’s Blackburn Rovers at Ewood Park, whilst Michael Owen got the winner in a 1-0 win at St James Park against Bolton.

The lucky bindippers picked up an undeserved three points at home to Middlesbrough following an own goal deflected from a Jamie Carragher chance in the 85th minute, with Stevie Me scoring the winner in the 94th minute. Top of the league! Two places above, er, Hull.

Elsewhere, Stoke City pulled off the shock of the day, beating Aston Villa 3-2 at Villa Park, taking the lead on three occasions.

To the Championship, where Andy Cole made his debut from the bench for Nottingham Forest in their 3-2 victory over Watford.

Steve Bruce’s lad got sent off playing for Ipswich in a game which saw former red, Sylvan Ebanks-Blake, get on the scoresheet.