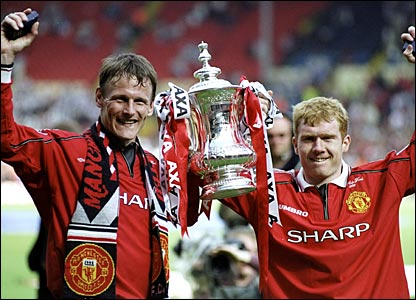 Every now and again when United are playing in an FA Cup game, the commentators will remind us how we chose to withdraw from the competition in 1999-2000, following our historic Treble winning season. Instead of taking part in one of the most prestigious cup competitions in the world, United instead took part in the World Club Championships.

Rivals fans will talk about our arrogance to do such a thing. It was seen as the club disrespecting the competition by pundits, ex-players and journalists alike.

However, the truth behind our decision to pull out of the FA Cup that year has been brushed under the carpet.

The Sports Minister at the time, Tony Banks, asked United fans to be understanding about the pressure being put on our club to withdraw from the Cup. FIFA had made it clear that England’s World Cup bid would be discounted if United didn’t represent the country, and Europe, in the World Club Championships.

“It is my estimation that a failure by Manchester United to go to the new competition in Brazil – particularly if they were replaced by Bayern Munich – would do irreparable damage to our 2006 campaign,” said Banks. “It is important for Manchester United – as perhaps the world’s most famous club – to hold the standard for England and Europe. These are extraordinary circumstances and it is an extraordinary decision to allow them to be exempt from next year’s FA Cup. But it is for one season and I do hope Manchester United supporters will realise the significance of what they and Manchester United are being asked to do.”

United wanted a chance to defend the FA Cup but were being put under a lot of pressure to go to Brazil. Our chairman, Martin Edwards, initially was prepared to travel and compete in the competition the government wanted us to play in, as long as it meant we could enter the FA Cup at the 4th Round. Everyone was a winner. But the FA were having none of it.

“Really it’s a no-win situation,” Edwards said. “It will help the 2006 World Cup bid if we go, and the Government and the FA are obviously very keen that we go. But if we pull out of the FA Cup that will disappoint our own supporters. We’re going to get criticised, whatever we do.”

David Davies, the FA’s executive director, continued to apply the pressure though, claiming “it would send the worst possible signal to world football at a time when we are in the midst of the 2006 bid to turn our backs on this tournament.”

A new Sports Minister was appointed, Arsenal supporting Kate Hoey. She was more sympathetic to our cause, disagreeing with the pressure Banks had put on the club to go to Brazil. She supported Edwards’ idea of allowing us to enter the FA Cup at a later date, which would mean we could fulfil our duties in Brazil as well as taking part in the FA Cup. Finally, someone was on our side and it looked as though we would be given the opportunity to defend our trophy after all.

However, it wasn’t long before United were being painted as the villains again and Hoey changed her tune. After the decision had been made final, that United would go to Brazil and not feature in the Cup, Hoey blasted our club in the press.

“I am just amazed that they have actually treated their supporters in what I would say was quite a shabby way,” she said. It was no longer Bank’s fault, it was no longer Davies and the FA’s fault, but it was all down to United. United had orchestrated this move and United had let down the fans. And that is the way the story is largely remembered.

Both Edwards and Ferguson reacted angrily to her statements, pointing the finger at those who had really been at fault here, the government and the FA.

“For a new sports minister to suddenly enter the arena at this late stage and tell us we are treating our supporters shabbily and should go back in the FA Cup is a disgrace,” Edwards said. “I suggest she does her homework and I suggest the government gets its act together, because we did this in support of the last sports minister.”

Davies has since spoken of the incident in his book, insisting that United never wanted to pull out of the competition but there wasn’t any other solutions.

“Supporting the Club World Championship was vital to keep FIFA sweet,” said Davies. “That message was reinforced by FIFA executive Chuck Blazer, who made it clear that if United didn’t represent Europe in FIFA’s major club competition it would be impossible for the FA even to dream of hosting 2006. United were completely torn, agonising over the decision. Right from the start Fergie was shocked about even the thought of forsaking the Cup for a season. His respect for the Cup ran deep – that famous Wembley victory over Crystal Palace in 1990 may even have saved Fergie’s job. I did feel I was betraying the FA Cup by giving United the option of withdrawal. Even though I’d spent my life besotted with the Cup, I couldn’t see any other way out. Even now, nobody has presented a way out we didn’t consider.”

United had little choice in this situation, with pressure being applied from all sides. When United did what the FA and government had asked, they washed their hands of the club and hung United out to dry.