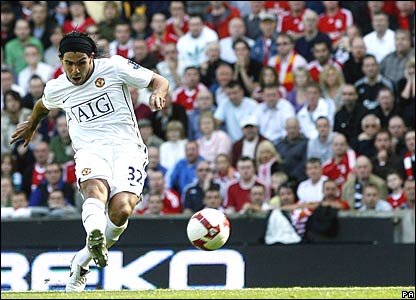 With five minutes four minutes played, Manchester United were a goal up as well as having been denied a clear cut penalty, and it seemed as though we would cruise to victory.

Our attack which lead up to the goal was so sweet, with new man Dimitar Berbatov with the assist. As he beat his man and pulled the ball back across the penalty area, I was desperate to see a white shirt run on to it. That’s exactly what happened, with Carlos Tevez lashing the ball in to the back of the net.

Just a minute before, Berbatov’s shot was blocked by the arm of Skrtel in the box, his hand in the air. If Michael Carrick’s was a bloody penalty at Stamford Bridge last season, then this was stone wall.

But two United mistakes lead to two Liverpool goals, giving Rafael Benitez his first league victory over United, as well as Liverpool’s first league win at Anfield against us in 7 years.

Where did it all go wrong eh? Looking at the lineup with the players available on the bench, there seemed as though there could only be one winner. However, with a fairly even first half, Liverpool bossed the second, with United more than happy to roll over and react to the dipper’s attacks, rather than initiate many of our own.

The first goal came when Edwin Van der Sar had a rush of blood and charged out to meet a ball. He got his finger tips on it, hitting it against Wesley Brown, leading it to rebound in to our net.

The second goal came when Giggsy was playing silly beggers on the touchline. He was beaten and Babel was left to just lift the ball in to the net when it came across the face of the goal.

It all went from bad to worse when Nemanja Vidic was given his marching orders. He tripped Robbie Keane, who was unsurprisingly totally useless, swinging at and missing the ball on several occasions, with Rio Ferdinand’s presence enough to save Vidic from a straight red. By the time of the second yellow card, I was too deep in to my pit of misery to pay much attention. They clashed for a ball in the air. Didn’t look much wrong with it and the referee’s delay in showing the red card probably indicates he wouldn’t have given the second booking had he remembered about the first.

No Gary Neville on the bench today meaning that with Nemanja Vidic suspended for the Chelsea game next weekend, we will be looking at Jonny Evans at right back, or possibly Rafael Da Silva, filling in on the right, with Wes shifting to the centre.

Sir Alex Ferguson played brave tactics today, starting with Rooney, Tevez and Berbatov, and with a few minutes played, it looked as though his risk had paid off. It’s now in hindsight we can see maybe Fergie got a bit ahead of himself. Starting Nani and Ryan Giggs on the wings, with Rooney and Tevez up front, probably would have been wiser. Berbatov then could have come on with half an hour to play and we’d have been laughing. Of course though, I was applauding his bravery at the start of the game, so I’m not going to criticise the decision now.

Any positives for today? Certainly. Firstly, Liverpool were easily the better side today, playing at home, yet their only goals came from United fucking up. We gave them the win, as even on top form, they couldn’t come out and take it from us at Anfield.

Secondly, the play leading up to the first goal was dreamy, and once our players settle and we work out our best XI, the goals will come pouring in.

Bad day at the office today, no doubt, and it might be an even worse day next weekend, however, I can’t see a way that our team will be surrendering the title this year. You win some, you lose some, and fortunately, we win far more than we lose. Gutting to lose against those scum bags, but at least we have our trophies to cheer us up.