United Handed Toughest Draw - History and Who To Look Out For 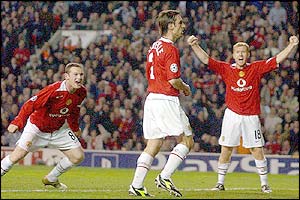 Manchester United qualified for the next round of the Champions League in flying colours. We won our opening five matches, drawing our sixth game once our top spot had been sealed, against the second best team in Italy, playing a significantly weakened lineup.

Out of all the teams we could have been drawn, Lyon was the toughest. They stormed to Ligue 1 victory last season, seventeen points clear of second place, and are leading the way this season. They have won the title for the past six seasons in a row, and with the French league being stronger than the Turkish, Greek, Scottish, and arguably German, leagues, playing the Champions of this league is asking a lot.

History
It was announced earlier today that Lyon are the team we are to play on February 20th next year, with the return leg being played at Old Trafford on March 4th. We are unbeaten against the French champions, but there is limited history between the two clubs. On our first meeting, we were 2-0 at half time at their place, but van Nistelrooy pulled back two second half goals to make it 2-0.

At Old Trafford, we beat them 2-1 thanks to goals from Neville (yes, Gary Neville) and van Nistelrooy.

Who To Look Out For
The player for us to keep an eye on is their captain, Juninho Pernambucano, the 32 year old Brazilian. He is a master of free kicks and has scored three goals in the six group stage matches. Since joining Lyon in 2001 he has scored 35 freekicks for the club. In December 2006, L’Equipe reported that 45% of Lyon’s goals resulted directly or indirectly from Juninho Pernambucano’s freekicks and set pieces.

Are you happy with the draw? Who would you have preferred?