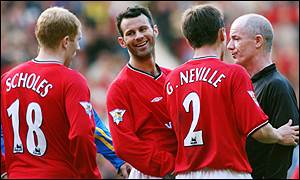 Manchester United’s most successful period, dominating the Premiership era of English football, has coincided with a time when the squad has been packed with talent from the youth team. Of course, there is no denying that superb management of Sir Alex Ferguson as well as the exciting talent from abroad have had a huge influence on the club’s success, but it cannot be ignored what a difference it makes to have players representing a team they have been a part of since they were teenagers.

When United won the Double at the end of a season which started with Alan Hansen’s “you’ll never win anything with kids” remark, it was clear United were destined for many trophy filled years. So many times the likes of Paul Scholes, Ryan Giggs and Gary Neville have pulled a performance out of nowhere, dragging the team forward if needsby, clearly motivated by their passion for the club. The same can be said of the more recent “kids”, Wes Brown, Darren Fletcher and John O’Shea, who have made up for what they are sometimes lacking in ability with their drive to succeed for their boyhood club.

Sir Alex Ferguson has today said he hopes the likes of Neville, Scholes and Giggs continue on at the club with some sort of role after their playing careers have ended, claiming they are “absolutely perfect for the club.”

“Players like Ryan, Gary Neville, Paul Scholes will follow the pattern of Ole Gunnar Solskjaer, I am sure of that,” said Ferguson. “It is something we will be looking at in terms of a future with us in relation to a position at the club in some shape or form because they have been fantastic examples. There is no doubt when it comes to personality, experience and lifestyle, they are absolutely perfect for a club.”

What roles, if any, would you like to see Neville, Giggs and Scholes perform for the club in the future?