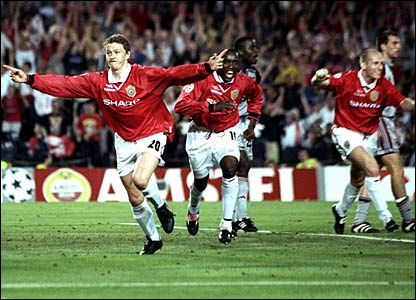 The Times has documented the top 50 moments in English football, looking at the occasions where pure magic was witnessed.

Watching a great game or important event on TV or reading about it in the papers – all well and good, but not quite the same as being there, is it? What if you had a time machine and could set it to take you back to any point in football history? Which matches, which moments, would you choose – so you could proudly say, years later, “I was there”? Here’s our list…

In the top 20, United feature an impressive 6 times.

An advertisement for never leaving a game early, as the European Cup final turned on its head at the death.

Ten years after Munich, Matt Busby’s Manchester United lifted the European Cup – the first English team to do so – beating Eusebio’s Benfica 4-1 after extra time at Wembley with two goals from Bobby Charlton and a fabulous solo effort from George Best.

George Best’s greatest individual performance, the 19-year-old unplayable as Manchester United thumped Benfica 5-1 in the Stadium of Light in the quarter-final, second leg of the European Cup.

Here is an except from The Times archive, reporting on this match.

Manchester are in the semi-final round for the third time since 1957. They reached that stage with the most inspired, inspiring, and controlled performances I have seen from any British side abroad in the past 20 years. Had I not seen it, I would not have believed it.

Manchester lived up to their word. They came to attack – not to defend. Mr Busby has raised a standard which all should follow, and he did so with a side that has the skill to attack, but did so with concentration and power.

The first all-English Champions League final – not just a historic moment but an enthralling game, and a penalty shoot-out that distilled a grand spectacle into a very human drama as John Terry, one of football’s tough guys, crumpled.

One of the best semi-finals in Cup history was settled by a stunning winner deep in extra time, as Giggs ran 70 yards to put his ten-man Manchester United side into the final.

Sent off for kicking an opponent as Manchester United met Crystal Palace at Selhurst Park, Cantona did not go quietly, reacting to abuse from spectators by lunging feet-first at a fan standing behind an advertising hoarding and punching him, causing a sensation. He was banned for nine months. Quelle folie!