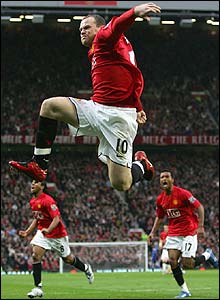 As the final whistle blew at Old Trafford today, all I could think was “Thank fuck I support this team.” Based on today’s performance, I’d be absolutely shitting myself if I was following any other team and had watched United play today.

As I wrote about last week, the myth of Rooney and Tevez has been well and truly shattered. They were on fire today, creating chances for each other left right and centre. The football which preceded Tevez’s first goal was just sensational. Tevez charged forward, playing the ball to Rooney, who cleverly flicked it behind him in to the path of the Argentinian, who coolly slotted it away. I’m pretty sure every player in red was involved in the celebration that followed, congratulating the beautiful football our two young players provided.

As for Rooney, his eighth goal in the past seven games he’s played in, and he is on fire. He made the most of a Downing mistake (remember him? The next big thing! The player to solve England’s left midfield problem) and fired the ball powerfully in to the back of the net. I started to lose count of the amount of goals which could have been scored due to the football he was playing. He charged through the defence time and again, and usually came out on top, despite his heels being kicked at and his shirt pulled. We’re starting to see the best of Wayne, and like last season belonged to Ronaldo, I hope this is his season.

The game started with a truly magnificent goal from Nani. As he kept creating space for himself, I couldn’t quite believe the thunder bolt he released on Schwarzer, and cannot wait to see it back on Match of the Day tonight. It reminded me of goals we’ve seen from Ronaldo in the past, which swerve in ways which make them impossible to save. I caught the end of his silly celebration, and that, along with the rolling around on the ground in “agony”, is something I could do without. Regardless, credit to him, and I think overall, he vindicated Ferguson’s decision to leave Giggsy on the bench.

Boro pulled a goal back due to poor marking from United, yet again, and it was the former Gooner man, Aliadiere, who took advantage. The dreadful marking from crossing is something which needs to be addressed, and sharpish. Last season, Vidic was on the end of almost every ball which came in to the box, heading the ball clear from danger, but this season, I’m surprised we haven’t been punished more often for some of the dopey defending I’ve witnessed. There is no doubting that Ferdinand and Vidic are having a very impressive season, and both made some cracking tackles today, particularly Vidic in the corner (before running the ball out of play) in the second half. But the defence as a whole need to pull their socks up, and if there’s anyone who see to that, it’s Neville, who is set to be in the squad next weekend. I’ll also be pleased to see Evra back at left back to replace O’Shea, who didn’t seem on the same planet of the rest of them until the 75th minute.

The reintroduction of Hargreaves to the team should help defensively, and I have no complaints about his performance today. He did just what was asked of him, and looked a cut above anything we’ve saw from Carrick last season. He has the quality we’ve been desperately searching for and my hat goes off to Ferguson who did not give up on the deal.

There were moments in today’s game, particularly in the first half, that would have left us exposed against better opposition. The ball was lost in silly places, and if Fabregas is on the end of those mistakes (as he was last season at Old Trafford when Ronaldo lost the ball at the half way line) next week, we will be punished. However, in the second half our class shone through, and I am excited to see how we measure up next weekend against another quality side.

All in all, I feel entirely entertained, and that is what football should be about. The last half an hour was just dazzling, with attack after attack full of beautiful football. The country are wanking over Arsenal’s football at the moment, but from what I’ve seen, it falls short of what I saw from our lads in the second half. Roll on next weekend!