United Should Be Flattered By Ronaldo Interest? 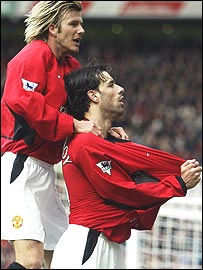 “If it was me, it would make me proud that the big clubs were asking about our players,” said Real Madrid rat Calderon yesterday.

I’ll address the possibility of this being a dig at the size of United as a club later. First, it’s important to state that United don’t have any problem with other big clubs showing an interest in our players. Of course it’s a compliment that a successful club feels as though your players are good enough to cut it for them. It’s not telling us anything we don’t know though, obviously, as Ronaldo could walk in to any side in the World.

However, if Calderon had merely come out saying “Cristiano Ronaldo is a brilliant player,” then there’d be no problem. But that’s not what has happened. We’ve been hounded, on a daily basis, with comments from this man and Real Madrid.

“We are in this situation as passive spectators,” Calderon continued, which is possibly the most ridiculous statement I’ve ever heard. Passive spectators are the hordes of fans who show up at Wimbledon every season, politely clapping the points.

Real Madrid are taking the piss out of us and making mugs of themselves whilst doing so. It appears though, sadly, as though they are entirely shameless in their efforts to sign the player they want, which is bad news for United.

According to the Cambridge dictionary, “passive” means “not acting to influence or change a situation”. It is totally apparent that everything Real Madrid have done in the past month is them taking an active role in trying to convince Ronaldo to move to their club.

“Spectator” is defined as “a person who watches an activity, especially a sports event, without taking part”. Whilst Real Madrid are watching to see if Ronaldo will publicly confess his desire to leave United, they are making sure they are doing everything they possibly can to sway his decision. Spectators at a football game look on as the players go about their business on the pitch. They do not run on to the pitch, have a kick of the ball, then watch to see what comes of it.

Real Madrid have shown themselves as completely low class, even inferring that United aren’t a “big club” like them. Lucky us, the mighty Real Madrid want to buy one of our players.

Ferguson wanted rid of Beckham and van Nistelrooy, so was more than happy when Real Madrid came sniffing. When they bought Gabriel Heinze off us last summer for £1.1 million more than we paid for him, and £1.2 million more than Liverpool had offered, I felt relieved more than proud. More fool them.

However, is it the talk of “big clubs” to kiss arse of the players they have interest in? Admiring Ronaldo is one thing, to put him on a pedestal is something different.

“For Madrid it is an honour to know that a player like him thinks that playing at Real would be good,” said Calderon. “We are proud to know that he would like to be with us.”

Whilst it’s undeniable that Ronaldo is a great player, essentially, that’s all he is. He’s no god, he’s just a 23-year-old footballer who enjoyed fantastic form last season. I find it embarrassing, quite frankly, that a club of Real Madrid’s stature would be “honoured” that any player had indicated they wanted to join them.

Can you imagine United stating they felt “honoured” or “proud” because any player was interested in a United move? It should always be the other way around.

That about sums up Real Madrid though, they’ll say and do whatever they need to in order to ensure the player joins them. The question is, will Ronaldo be stupid enough to fall for it?