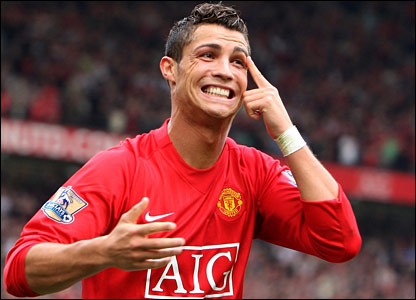 Yesterday morning I wrote an article about United’s goalscoring, following the criticism we’ve faced this season. The article finished with, “Our time to come good is upon us, and sooner or later, we’ll see the goals pouring in. And you can hold your breath on that one!” Even I, as optimistic as they come, was not expecting the 4-0 demolition today. If I had given more thought to our opposition maybe I could have predicted the result.

When Wigan first came up to the Premiership in 2005, Christmas came early for United as we battered them 4-0. Rooney scored a couple, with Ruud and Rio bagging the others. We faced them again just a couple of months later in the League Cup final, where again we saw them off 4-0. Rooney scored two again, with Saha and Ronaldo scoring the other two. Last season, both game ended with four goals scored, on both occasions three in favour of United and one for Wigan. It was the 3-1 win on Boxing Day 2006 which saw Ronaldo score two against them.

Yesterday, it appeared to be a tough task at half time to keep up with our four goals a game record against Wigan, but the Champions showed they were up to it. Tevez opened the scoring with a brilliant goal. “Give it or shoot!” and then he took on another player. “Give it or shoot, now!” and then he took on another player. “For fuck’s sake, pass the ball on or shoot” and he slotted the ball perfectly in to the goal. Anderson, who had an impressive game, unleashed Tevez with a great ball, who was far more patient than the fans to make sure the ball ended in the back of the net.

Five minutes later Ronaldo headed home to make it two nil, and less than twenty minutes later, allowed Rooney to do the hard work whilst he effortlessly guided the ball in to the goal from a perfect pass from Rooney. That’s four goals in five games now for Ronaldo, showing he is on track to meet his target of equalling last year’s scoring total.

Rooney, who had a brilliant game, was rewarded for his effort and generosity all match, when Danny Simpson provided him with a great ball to header past YSB Kirkland.

Just what the doctor ordered. A great result, a great performance, particularly in the second half, and now we’re top of the league (at least until tomorrow) again. Back to where we should be. Like a lot of United fans who have been following Sunderland this season, I will have my fingers crossed for them tomorrow. If they could just take a point off the Gunners, it would be great news for us, and no manager will be keener to do so than Roy Keane. In a pre-match interview this week, Keane spoke about the rivalry between United and Arsenal. “It was brilliant, absolutely brilliant. Usually my preparation for a game on a Saturday if we were playing Arsenal would start on the previous Sunday,” Keane said. “Your body just knew you were going to play Arsenal, just psychologically, your body would get ready for it. It was the same for all the players, and I am sure it was the same for the Arsenal players. Those games were brilliant, absolutely fantastic, the best. United against Arsenal – if you could go back for one game, then that would be the game. Both teams were usually fighting it out for the title – it was fantastic. You would give anything to play in one of those games again.” So come on Keano!

However, I do have two moans about the Wigan match. Firstly, the injury crisis which is now upon us. The international week has come at just the right time for us, giving the players with knocks to get themselves ready for our next match, away to Villa. However, based on the performances of Simpson, Pique and Anderson today, we appear to have our bases covered. They looked top notch, but an away trip against tougher opposition will provide the real test for them.

Secondly, the shocking refereeing. Two weeks running, United have had two stonewall penalties turned away. Joe Cole flattered Evra last weekend, and the referee who had a good view, waved it on, too spineless to award an Old Trafford penalty. Today, Ronaldo was knocked over right in front of referee Riley by that thug Brown, who stamped on Giggs last season and got away with just a yellow card. Every person in the ground could see it was an obvious penalty, but somehow, Riley couldn’t. For all the talk there is of penalties at Old Trafford, we don’t half get a lot of obvious shouts turned down. When a team attacks the box and spends as much time in the area as United do, then of course there are going to be plenty of situations where penalties should be given. Halsey awarded United a penalty for Ben Haim’s lazy challenge on Saha last week, but only in the last minute, when there was little doubt of who would be picking up the three points that day. Still, mud sticks, and the incompetent tabloids will continue to spout rubbish about United always getting their way with the ref at Old Trafford.

Still, we got the points, we needed a goal boost, and we should have known we could have relied on Wigan to provide us with it. Our goal difference is now a more respectable nine, just three short of Arsenal, and the players should now have the confidence and self belief back. We are the Champions, and today, finally, we played like the Champions. Let’s keep it up now.

Are United back? Can Villa expect similar treatment?