Van der Sar Will Be Back For Bolton 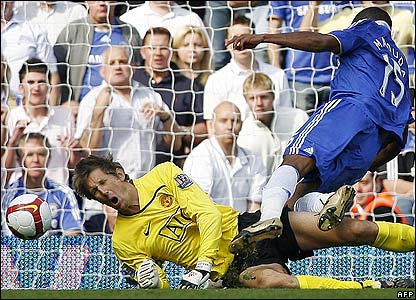 Edwin Van der Sar was substituted with half an hour played against Chelsea today, following a tough challenge with Florent Malouda.

Whilst Andy Gray was hoping for a penalty, it was clear our keeper got something on the ball. He tried to stay on the pitch, but it was only minutes later that he made way for Tomasz Kuszczak.

With Ben Foster picking up an injury whilst playing for the Reserves in the week, an awkward fall on his ankle likely leaving him out of action for two months, United would have been short of goalkeeping options.

However, at the final whistle, Sir Alex Ferguson confirmed that Van der Sar should be back for next weekend’s game.

“He got some studs in the kneecap and there was a bit of swelling there,” Ferguson said after the match. “Hopefully he’ll be okay for next week.”