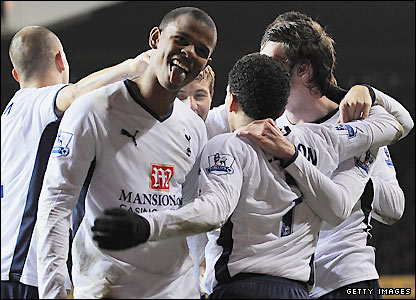 Frazier Campbell, who is currently on loan at Tottenham Hotspur, has got on the scoresheet in tonight’s Carling Cup 3rd Round match at White Hart Lane against Liverpool.

Man of the Match for our lad who scored two and set up another, in Spurs’ 4-2 victory which saw Liverpool dumped out of the cup.

After the match, Campbell was awarded with his champagne, before manager Harry Redknapp sung his praises. “I can understand why Alex won’t sell him,” he said, dispelling any rumours that a permanent move to Spurs has already been agreed for the young striker.

Click here to watch his first and here for his second.