VIDEO: Reactions To The Chelsea Shoot Out 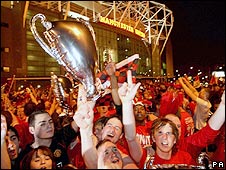 United fans are lucky to have several matches to choose from as “the greatest ever”. The ones that tend to rank most highly are the ones where we should have been well and truly beaten, but somehow managed to come back and win. In 1999, we saw several games like this, with the games against Arsenal, Juventus and Bayern Munich.

Last Wednesday, United won the European Cup in a sudden death penalty shoot out. After missing several great chances in the first half of the match to wrap the game up, United were hanging on by the skin of their teeth in the shoot out.

John Terry had the chance to win the Cup for Chelsea following Cristiano Ronaldo’s penalty miss. However, he lost his nerve and missed the target. The relief and joy brought about by this moment was incredible.

With successful penalties from Nani, Anderson and Giggs that followed, the pressure was all on former dipper, bitter and gooner, Nicolas Anelka. It was all too much for him though and Van der Sar got the better of him, and United won the European Cup. Unimaginable and indescribable happiness.

So, how did you celebrate?