Vidic: Paddy And I Laugh At Disastrous Derby Debut 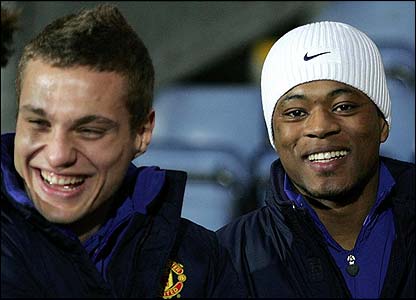 As Robbie Fowler flashed his five flabby digits in the direction of the United section after scoring the third goal, it was a clear this was going to be a day better off forgotten for our fans.

Patrice Evra was making his debut for United that day and was completely bossed at the back by Trevor Sinclair, of all people. “It’s never nice as a defender when you concede goals,” he said after the game, where he was subbed off at half time. “I can’t be happy with my debut. But I’ll quickly put that behind me. Now we’ve just got to knuckle down.”

Vidic made his debut a couple of weeks later, coming on for goal scorer Ruud van Nistelrooy in the final moments of United’s League Cup semi-final victory over Blackburn.

These two players got their first 90 minutes together in the 4-3 defeat to Blackburn in the league the following week, in a match that was marred by defensive errors for United.

Vidic has today reflected on how the pair of them were not very happy when they first arrived, but now want to stay here for a long time to come.

“We speak about it quite often,” said Vidic. “Neither of us started well and we used to say we wanted to leave. We can laugh about it now because we have both reached 100 games. I am really pleased. I have worked hard to achieve that and I would like to play many more games for United.”